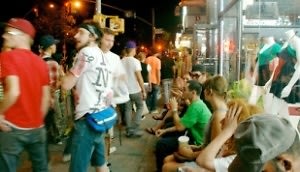 Remember summer 2007? MisShapes was going strong. The Annex was not the Doghouse Saloon. American Apparel hadn't expanded to the Garden State Mall. And the benches outside the chain's Houston Street branch became the place to be. Now, like Kids Meal, most of them have vanished. -

Per Bowery Boogie, five of the nine benches wrapping around the corner of East Houston and Orchard Streets have been ripped from the concrete. Boogie got what constitutes an AA employee's idea of the scoop:

"According to one sales associate, this permanent removal was a 'whole ordeal, 'but necessary since they 'didn't want people living outside the store anymore.'"

Because the homeless people the staffer is presumably talking about would never sit on the sidewalk itself.

The removal brings to a definitive end the rein of the American Apparel benches as an unlikely downtown "scene." It all started in August of 2007, when the Observer noted the explosion of fashion and music industry heavyweights and hangers on turning the place into a jokey play on the pursuit of shallow, ephemeral "it" spots.

But it wasn't all a joke! As Gillian Reagan put it:

"...the bench isn't an elaborate inside joke for everyone who stops by. At a moment when the clubs seem particularly awful--absurd entrance fees, played-out party ideas (80's jams? The MisShapes? Yawn), an ever-tiring rotation of the same three Beyoncé songs--The Bench seems like a pretty good idea."

American Apparel is the new Abercrombie & Fitch. The Lower East Side and club scene have only gotten worse. And the hipper-than-thou set long ago moved on from downtown and Wiliamsburg to Bushwick, from street level to the nightlife underground. As with the hotspots it skewered, The Bench's party wasn't meant to last.