Sometimes our pretty city, New York, is just so hot we can't help but take our clothes off. And with the growing temperatures that are likely to stay in the record-breaking 90s into August, people may have to strip whenever they can. We can't let the Naked Cowboy have all the fun can we!

Here's some nudie events around the city.

The Semi-Nude Cyclist event took place this past Sunday. The event was to protest harmful environmental effects from cars and oil dependencies and promoting alternative transportation. Always the kill-joy, the NYPD were on hand to stop anyone exposing too much.

At least 25 police officers were assigned to observe the bike ride. As you can see in the video below and according to WNBR NYC, shorts came off once the police left.

Earlier this year The 'No Pants Subway Ride happened. The annual event allows New Yorkers to ride the subway in their skivvies. Probably the only day where one could ride around in undies and only half of NYer's would look at you crazy. As opposed to all of them looking at you crazy. 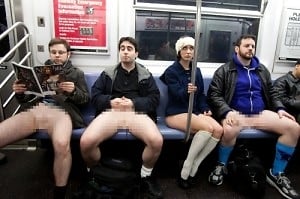 The Improv Everywhere group above staged a fake mission for April Fool's day though. Don't do this!

Recently, the American Association for Nude Recreation has been pitching for Coney Island to have a designated nude beach. Would it bring more European tourists to southern Brooklyn? We don't see it happening anyway since that entire area's getting completely revamped to draw families!

But if you're looking for a free-er beach experience, Sandy Hook & Fire Island are the beach to lay out in the nude. 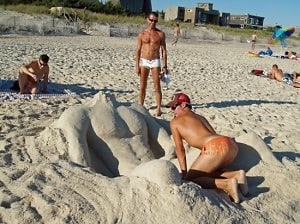 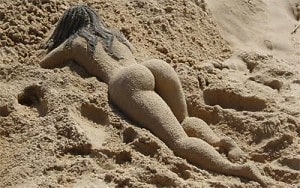 Its considered one of the world's beautiful beaches off the coast of Long Island in Suffolk County, New York. Its a weekend destination for plenty of New Yorkers. The nude beach on Fire Island, Long Island can be reached by car or boat. And there are several nude beaches on Fire Island. But people don't restrict stripping to oceanside, discreet nudity is frequently practiced on isolated stretches of sand in between towns.

You may have to venture to New Jersey for this nude hot spot. Also known as Gunnison Beach, its the only legal nude beach in New Jersey. Also, its liquor is permitted here so this obviously is a place for the single young crowd only.