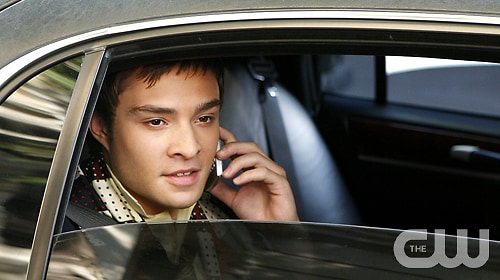 Every Thursday, NYMag's daily Intel blog does a recap on the latest Gossip Girl episode's believe-ability. And every one I've read has left me chuckling. On that note, every episode has left me giggling at parts because of the ridiculous nature of some of the scenes.  They are usually right on as far as capturing the UES set-or even underplayed a little. The funniest thing about it all is that my counterparts back home watch the show and have got to take away a whole slew of different things than myself. They probably watch it mostly because its entertaining TV, much like 90210 and Melrose Place back in the 90s (when Heather Locklear was hot!). However, I think that the viewers watching with little to no real-life knowledge of the privileged teen here falls into one of two camps: They either think that it is a completely fabricated reality to entertain viewers and in no way a representation of real life, or they think that this is exactly the way it is in New York City for teens and are equally fascinated/shocked by the lifestyle. Which is why I suggest all of the non-New Yorkers read the Intel's interpretation each week (go Here), as since they do a good job of scoring the latest episode's plausibility.

-congrats to our lovely Lorick, we saw her brief cameo (she was the cute, short-haired blonde playing one of the fashion assistants). Your clothes SHINED on screen.

-Favorite line: "He looks like Matthew McConaughey between movies."

-Though they probably didn't plan for this to happen, starting the show off with "Moon River" playing while Blair is standing outside Tiffany's Henry Bendel was very fitting with the opening of theTiffany's new Wallstreet store yesterday. (Even if it wasn't the same store, it was in direct relation to the scene from "Breakfast at Tiffany's")

-Chuck is such a vile character I am starting to change my feelings towards him. He may in fact be my favorite character on television right now. He reminds me of the character that Mark Wahlberg played in Fear that took advantage of poor Reese Witherspoon (God, gabbing with girlfriends about that roller coaster scene took up at least 7 hours of my life in jr. high!). I was cracking up when he locked away his Piaget and then in his introduction speech for the "Lost Weekend" party stated very matter-of-fact: "The only girls you talk to are the ones I paid for". It seems only fair if he's the one fronting the bill for the affair...haha. Also, did you see his basketball outfit?? Hilarious. He may be the representation of everything I hate about spoiled rich boys under 25, but he plays the part so well, you can't help but love him.

Gossip Girl just got picked up for a full year and I am wondering when they are going to take the kids out to The Box for a REAL adventure.