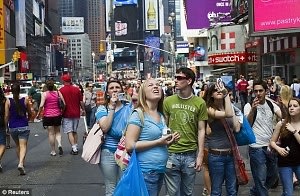 Tourists who come to New York often become obsessed with looking, acting, and behaving like "real New Yorkers". Unfortunately for our beloved guests from around the world, they often fall short of the mark...way short of the mark. Personally, we think it's fine for tourists to act like tourists, but if your visiting friends REALLY want to pass as New Yorkers, we have a few tips....-

Let's start with the basics.

This Is How A Taxi Works:

Taxis, we've noticed, can be pretty perplexing for out-of-town visitors. Perhaps it's beecause most cities allow you to actually call a cab to wherever you need to be picked up. New York, naturally, is a little more cutthroat about things.

The most important thing to remember is to not wave your arms like a maniac at any passing yellow cab. Remember:

If the middle lights are on: This one is free! Hail it by non-chalantly raising your arm.

If NO lights are on: Sorry, someone's in there. It's not gonna stop for you.

If the side lights are on: That taxi is going home. Waving your arm more furiously isn't going to help. 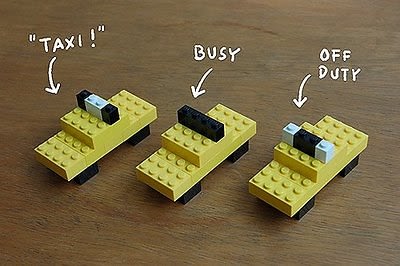 The Art Of The Metrocard Swipe 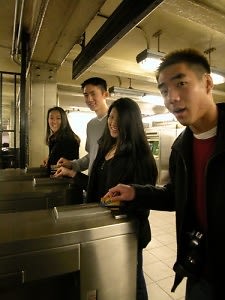 Nothing screams "Tourist" (or "incompetent New Yorker") more than seeing someone fumble while swiping their Metrocard, eliciting the tell-tale long beep that tells you to "Please Swipe Again At This Turnstile". And then the person gets frustrated, and the line behind him gets longer, his companion who has already swiped through says "Come on!!!" urgently as the train comes, and it's just embarrassing for everyone.

How To Swipe Your Card Like A New Yorker

1. Have your Metrocard ready to go. Don't stop in front of the turnstiles and fumble for it in your wallet.

2. If someone is trying to exit out of the same turnstile you are trying to enter through, do NOT politely allow them to go first. You are a New Yorker; you've got places to be.

2. With the yellow part facing you, walk through the turnstile at a normal pace while simultaneously swiping your card through the reader. Hold the card firmly, and don't do it too quickly. Don't look at the reader while you're doing it, either. That's amateur. 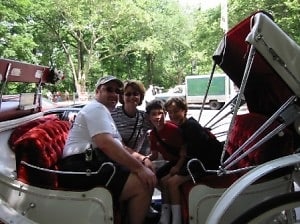 The Southeast Corner of Central Park

Port Authority (This is for YOUR safety, really.)

The inside of one of those horse and carriage rides.

Ground Zero, while wearing a shirt with an American Flag on it and taking pictures.

The Metropolitan Museum Of Art 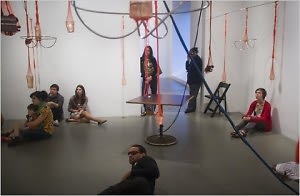 The Southwest Corner of Central Park

Ground Zero, while wearing a business suit and talking loudly into your cellphone.

The Hotel On Rivington.

Use Driving Rules On The Sidewalk

You know how your hometown has freeways? Sidewalks are freeways for New Yorkers, and just like your freeways, people usually go pretty fast and get really annoyed at congestion. Apply the same rules you would use while driving on the freeway to walking on a Manhattan sidewalk.

Going slower than the rest of traffic? Stick to the right.

Need to text/consult your map/stare at a landmark? Pull over!

Planning on making a turn? Head over to that side of the sidewalk; DON'T just randomly turn right in front of people walking straight, causing a major traffic jam.

When exiting a building onto the sidewalk, be aware of oncoming traffic: don't just walk to the center of the sidewalk.

More than two people walking abreast is too much.

Don't make eye-contact with people on the street. Ever. Imagine you will turn to stone if you look at us. Don't do it. 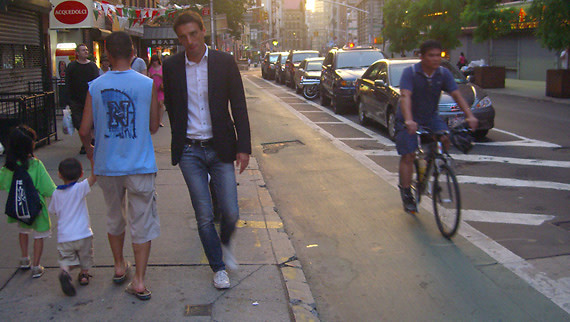 What To Avoid Wearing While Walking Around The City 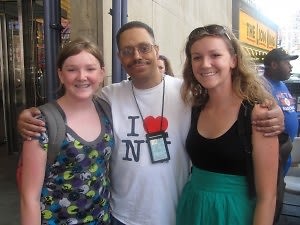 Anything sort of apparel with "New York" written anywhere on it.

Any sort of apparel that was purchased at Disneyland.

Running shoes, when not at the Hotel Fitness Center.

Any sort of pant that ends before the ankle but well past the knee. Aka Capris, bermuda shorts, etc.

DON'T get too excited in public, about anything. Did you just get proposed to on the Empire State Building? Act blase.

DON'T sing songs from the Broadway Musical you just saw in public. Just don't sing at all.

DO try to look bored/miserable/important at all times.

DON'T clap for the annoying subway buskers, for god's sake.

DO feel free to scream at the bike messengers who nearly kill you when you're crossing the street.

DON'T videotape, like, your walk down the street. Are you really going to want to watch that when you get home?

DO feel free to ask people for directions on the subway; that's actually better than obnoxiously leaning over someone to stare at the subway map.

Time For A Pop Quiz!

In how many of the following situations should you stop walking?

If you walk by a famous landmark?

If someone gets hit by a car?

If a really famous celebrity walks by with their groceries?

If a homeless person asks you for money?

If you walk by an "homme statue" (man pretending to be a statue)?

If a movie or tv show is filming?

If someone just got stabbed and is lying bleeding in the street?

If you see a really enormous cockroach?

If you see a really cute stray cat?

If you realize your wallet has just been stolen?

If you realize you're completely lost?

If you answered "NONE! You should NEVER stop walking, NO MATTER WHAT!", then congratulations! You can pass as a real New Yorker! 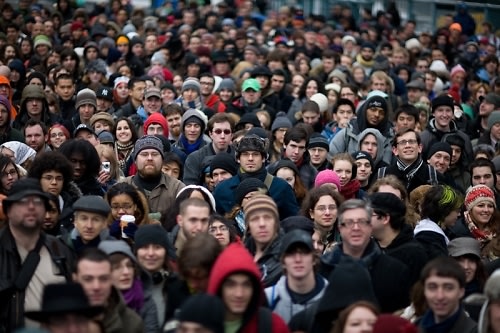