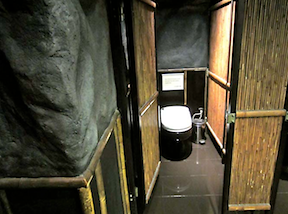 If there's a pungent scent in the air, it must be that time of year again! I refer, of course, to Cintas' (tenth!) annual America's Best Restroom competition, and voting is open now! Two of this year's finalists are right here in New York, but what are some other unique thrones around town? Check out some of the city's coolest spots to do your business!

One of this year's two New York finalists in the Cintas' competition. If you've never been to Ninja, well... More an "experience" in the vein of the city's other theme restaurants (Midtown's Jekyll & Hyde comes to mind), Ninja is designed to resemble a medieval Japanese village, with the booths as its huts. The big gimmick here is that actors dressed as ninjas sneak around pretend to assassinate you throughout your meal, which is just as awful and just as absurdly overpriced as at the city's other theme restaurants. The bathroom features lots of fake rock and bamboo paneling, but the main draw are the Japanese toilets, which include extensive features like a built-in bidet/drier and seat warmers (!!). Though a rare novelty here in the US, toilets like these are actually pretty standard among classy environs in Japan (they even have them at the Tokyo airport), and that spritz feels a lot more violating than you might imagine. 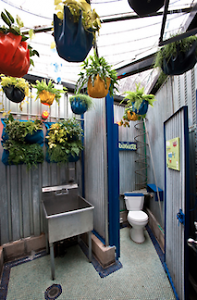 This year's other finalist features galvanized metal walls and a glass roof for that shantytown-chic piss you've always wanted to take, plus bonus environment (and authenticity?) points for the building's complicated system of rainwater flushing and a canopy of potted plants hanging from the ceiling that let you pretend you're actually squatting in a Caribbean shack during a storm. Minus the whole part where you get wet and you don't have a table at a nice Cuban restaurant in Brooklyn to return to, of course. 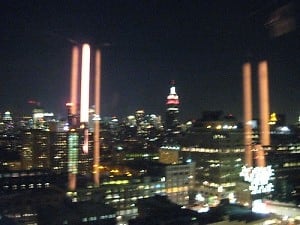 Shortly after the High Line opened, the Standard became something of a notorious hotbed for people who wanted to exhibit themselves a little bit, and that tradition is carried up to the higher floors. The Top of the Standard, noted for its killer views, ensures you don't have to stop ogling at the lights when you step away from the party to do your business by putting floor-to-ceiling windows in every stall. Keep away if you're prone to bouts of vertigo, but if you've fantasized about taking a dump while soaring over Manhattan (and really, who hasn't?), this place is perfect for you. 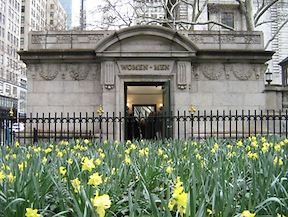 Thought city bathrooms were just cool places to pass out after a smack binge? Though on the outside it looks like a European war memorial, the public bathroom in Bryant Park has actually been renovated recently into what appears to be easily one of the nicest park toilets in history, such that it was featured in last year's America's Best Restroom contest. Unlike the piss-stained concrete and cold metal you might associate with your worst-case-scenario public bathroom nightmares, Bryant Park's john features marble and tile surfaces, lacquered wooden stalls, fresh flowers and a full-time attendant. Now that's class! 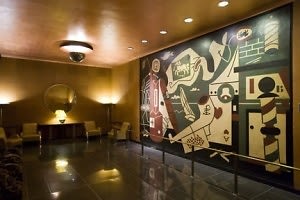 When it opened in the '30s, Radio City was the largest movie theater in the world; though it hasn't shown movies regularly since the '70s, millions of people flock to it every year to check out its primo stage shows and the landmarked Art Deco interior. Featured as a runner up for America's Best Restroom in 2009, Radio City's massive bathrooms ooze the streamlined design of prewar New York that we remember so fondly. 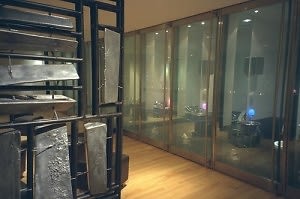 Walking into the bathroom at this SoHo bar is initially kind of a terrifying experience for those of us with a bit of modesty. You're probably a bit tipsy when you wander up the stairs and—oh no—the stalls are clear glass! The trick here is that the glass frosts over instantly when you lock the door, though I'm sure plenty of people don't realize this until it's too late (or are just too drunk to get the lock to work, or assume it must be some kind of one-way mirror, or just like exhibiting themselves to strangers), and then not only have you gone and embarrassed yourself but you've also scarred whoever wonders in after you.

Unless otherwise noted, images via Cintas.