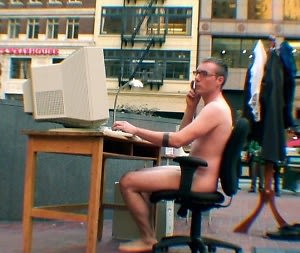 Last week we took a look at a new phenomenon we've seen hitting the city as temperatures soar into record highs. It's not owling, coneing, or planking. It's people getting naked, in public. This morning, those walking on Wall Street got to see this first hand.

This morning some 50 people in various states of exposure took part in a performance art piece called  “Ocularpation: Wall Street," created by Zefrey Throwell. Zefrey is responsible for last years Entropy Symphony, in which 75 people took to the Whitney and performed on the six levels in order to break the museum's every rule. He has also did a piece called Street Cuts in the middle of pre-Christmas crowds in Times Square which included a performer jumping out at him, pretending to attack him, cutting his hair, and eating it, amongst other projects.

For this morning's work, those involved acted out the different occupations to be found on the famous financial block before getting naked. Zeffrey told the New York Times that the idea "was to expose the realities of working on the nation’s financial artery as a commentary on the state of the economy, though most passer-by simply saw flesh."

Info is still being gathered, but at least three people were arrested.  Those taken in were a faux dog walker, janitor and stock broker.

Gawker, for those interested, has a Full Monty video of the man likely playing the jazzercise instructor.

[Getting Naked In The City...In Public, A Growing Trend]