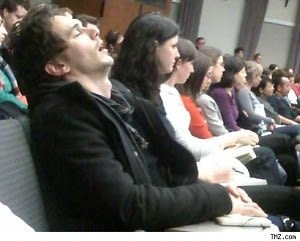 James Franco, scholastic Renaissance man and aficionado of all things bizarre, has taken on a new role- as life ruiner. The Ph.D and Oscar toting actor/writer/producer/artist is the catalyst behind a lawsuit filed against NYU by Jose Angel Santana, a former professor at the university.

According to Santana, the university fired him after he gave the 127 Hours star a less than stellar grade of "D".  Santana claims Franco consistently ditched his "Directing the Actor II" course, attending only 2 out of the 14 classes given that semester.

Santana suggests that other professors at the Tisch School of Arts simply overlooked the actor's tardiness, in exchange for him hiring one of their own, Professor Jay Anania, to direct his film William Vincent.

“The school has bent over backwards to create a Franco-friendly environment, that’s for sure,” Santana told The Post. “The university has done everything in its power to curry favor with James Franco.” [Post]

In a completely unrelated note, Franco later went on to Yale, and has most recently served as professor of a graduate film production class at the aforementioned NYU Tisch School of Arts.