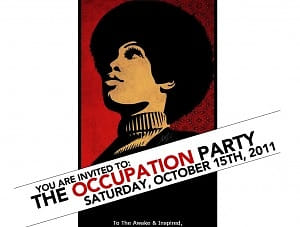 If you're not counting rogue protester coke parties, it looks like Occupy Wall Street is about to throw its first official major bash, The Occupation Party—in Times Square, no less. A ragtag brigade of different marches and actions will “culiminate in Times Square at 5pm on Saturday for a peaceful moment,”

according to Will Etundi, a party promoter/political activist most recently known for throwing dumpster pool parties in Queens.  The dress code: all white. At this time, 1,728 have RSVP’d through the form on the Party’s site, and that number is growing fast.

While Etundi's art talent agency Artists Wanted has about 165,000 subscribers on their e-mail list, Will says he hope to reach “300,000 to 400,000 people” on various lists, including his underground collective TheDanger (thrower of said dumpster pool parties), as well as other comrades’ lists, from the Roots’ OkayPlayer.com to quirky flashmob organizer newmindspace. Will, however, is not at the helm of the Party, emphasizing that it is a “leaderless movement.” 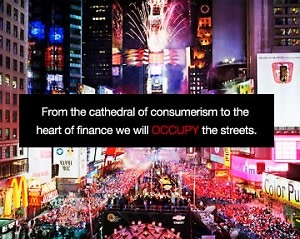 While those numbers sound impressive, the actual turnout will be a fraction of those who receive the broadcast. But I’m sure you’ve all heard of word of mouth. And did we mention that Kanye West, Talib Kweli, and Moby might show up, thanks to OkayPlayer.com’s new outreach program, Musicians Occupy Wall Street?

Says an Okayplayer employee: “As for Saturday, I definitely cannot say whether or not any celebs will be there - I havent even had those discussions. They will all be invited, of course. My guess is that there will be plenty of well known musicians and other celebs there, but they'll be there incognito.”

For his part, Etundi says he wants the protest to avoid the police clashes that happened on the Brooklyn Bridge weeks ago. “The goal is non-conflict, with protesters keeping to legal pedestrian areas.” He added that cops are not the target of their ire. “We are not anti-police. We want big banks to personally take responsibility for their actions as corporate citizens. We want this to be a celebratory moment that expresses hope alongside defiance.”

At sunset (around 6:30 or 6:45), Etundi says the group is going to “come together and light up the night.” He’s keeping secret what could happen at that moment, but he say “it’s a special thing—beautiful and dramatic.”

I asked if it would be fireworks. “It won’t be illegal, but it’s kind of expensive.” Now that’s food for thought.