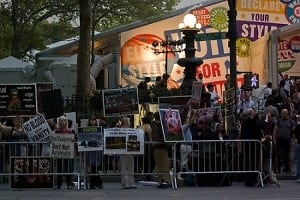 In what may be the first time rumpled theater geeks have acknowledged the existence of Fashion Week, stagehands are mulling a picket line outside the event's new Lincoln Center digs. Could fur lose its status as the most controversial "statement" at the proudly frivolous clothing extravaganza?

The Wall Street Journal's Erica Orden reports on the simmering tension. It basically boils down to the fiercest turf war in the neighborhood since the pre-Lincoln Center days of Jets and Sharks dance battles:

"The contract between the union and the performing-arts complex gives the union jurisdiction over many events on the Lincoln Center campus, including those held in venues like Alice Tully Hall. But it does not require the use of union labor for events that take place on the plaza or surrounding areas, such as Damrosch Park, in the southwest corner of the plaza, where Fashion Week will pitch its tents."

Fashion Week producer IMG Fashion, Local One of the International Alliance of Theatrical Stage Employees, and Lincoln Center for the Performing Arts hope to resolve the feud before the festivities kick off September 9th. But it's surely not the housewarming Fashion Week hoped for in its first Lincoln Center outing after moving the tents from Bryant Park. From the get go, the switch to the fusty Upper West Side arts center was a an odd move for the cutting edge designer showcase. A fuss involving organized labor is perhaps the least stylish way to compound the event's problems.

Anyway, if the dispute continues perennial fur-lover and PETA target Anna Wintour might have to worry about "accidents" like falling spotlights in addition to buckets of fake blood and a tardy Marc Jacobs.