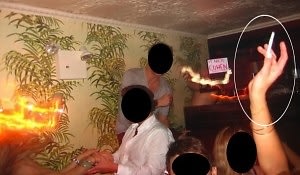 Things used to be so easy in the 80s! The health effects of smoking were less documented, smokers were less persecuted, and every time you walked into a restaurant you were pleasantly asked "Smoking or Non?" thereby ensuring that smokers and non-smokers wouldn't ever have to interact. Twenty years later, things have changed, and it's high time we all learned to get along.-

I come from California, and when I moved to New York at 18, I'd never even seen someone my age smoke. The past six years have been an exercise in learning how to get along and compromise with smokers, a task which surprisingly becomes more and more sensitive with the ever-increasing smoking prohibition laws.

I've spent a lot of time lately talking to friends on both ends of the smoking spectrum. It's a sensitive and constantly evolving conversation, with personal rights at stake for both sides. Here are some suggestions of ways smokers and non-smokers can be considerate of each other. Again, pretty controversial subject. Would love to hear your thoughts in the comments!

Smoke aggravates asthma, second hand smoke gives you cancer, and we all remember Debbie. The problem with us non-smokers is that sometimes we feel that we have the moral high-ground. And that means that sometimes, we can be a little inconsiderate ourselves.

Here's the golden rule of being a non-smoker:

Just because you don't smoke doesn't give you the right to be sanctimonious or rude about it.

Do you think that a smoker has somehow managed to make it into adulthood without ever having seen a PSA, attended health seminars in High School, been informed about the health issues from a doctor, or noticed that every cigarette box says "SMOKING KILLS"? So spare them the "Do you know that gives you cancer?" talk.

Smokers have to go outside sort of frequently, and this isn't easy: they either have to go into "the pen of shame" and smoke in a 4 by 4 roped off area with 12 smokers huddled together, OR they have to walk nearly a block away from the club before they're allowed to light up.

Sometimes, clubs will enforce a mandatory coat check. Such places make it extra difficult for smokers, who then have to continually check their coats in and out every time they need a cigarette. Not that this impediment to smoking should dictate where you go out at night, but if it's all the same to the non-smokers, you might find a more lenient venue.

The whole "oh god, someone is smoking near me, let me engage in a full-fledged fake cough attack" thing is rude, obnoxious, and embarrassing for everyone involved.

If you saw someone who was overweight buy candy at the deli, would you comment? No. So also don't do it when someone buys a pack of cigarettes.

And a tip from my smoking friend: "If you're legitimately concerned about a friend whose smoking habit is getting to be upwards of a pack a day, stealthily offer them gum when they're out somewhere. We are easily distracted by gum and it'll keep us from smoking for at least an hour." Good to know!

To be a smoker is your own personal decision, one which non-smokers will respect as long as it doesn't affect anyone else.

The golden rule of being a considerate smoker is:

Make your smoking as unobtrusive as possible.

Most smokers I know are pretty good at this, actually, but just to get it all in writing:

If you're indoors, ask if you can smoke. Of course you don't HAVE to do this if you have guests over in your own house, but it's certainly polite.

When it's 0 degrees outside, don't make your companions wait outside with you while you finish a cigarette.  That sucks.

Conversely, don't abandon your companion alone at the bar while you go out to have a cigarette. Invite them to come hang with you while you smoke. That way, if they stay at the bar it's their choice.

When you're done smoking, be mindful of where you flick your cigarette. I've actually gotten hit with a burning cigarette just walking past a bar. YOU ARE THE REASON THERE ARE LAWS ABOUT WHERE YOU CAN SMOKE, person on 16th Street!

Do be aware of who's around you. If there's a newborn next to you, or, say, someone hooked up to a respirator, walk away before lighting up.

Again, it's your habit, so don't feel entitled to dictate where you go at night based on your smoking needs.