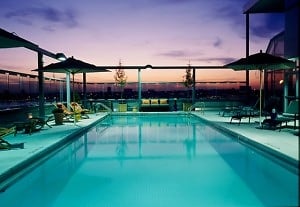 Swimming brings back fond memories of childhood summers spent practically underwater, and some enviable tan lines. Unfortunately, living in the city means no backyard swimming holes, but this doesn't have to cramp your style.

The city's a veritable paradise of pools. Indoor, outdoor, Manhattan, rooftop, take your pick. We even threw the Bronx in just for kicks. 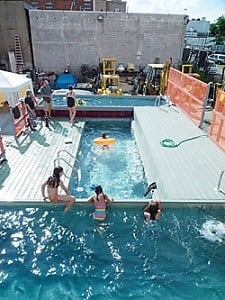 1. Praised as the Soho House of the recession, they first made their exclusive, grand appearance on the NY scene last summer. But now they're back with a legal vengeance for the next three Saturdays! So, plenty of time for you to partake in the trendiest new way to swim.

2. They're portable, which is like the coolest thing ever.

4. You get a bracelet at entry, so you can feel like you're a kid again! Collect them, you know you will.

1. They're uber tiny, and can only fit 10 people at a time. Better yet, it's expected to be so crazy-packed that people will be assigned pool shifts.

2. Park Avenue. Sporting an itsy-bitsy yellow bikini amongst the hordes of people on Park Avenue isn't exactly our cup of tea.

3. In the end, it's still dumpster diving.

4. It's almost too hip for the even most legit of hipsters. 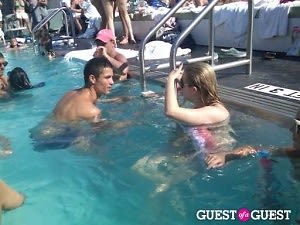 1. It's a hot spot for famous people and wannabes, so it makes for prime people watching. After all, actual swimming is so overrated.

2. Uber exclusive and notoriously private, and thus, one of the most coveted hangouts. Essentially a citified country club. Even Carrie had to sneak her way in!

3. The signature drinks are tasty and have cute names like "Lovely Pear". They're priced in british pounds (how international).

1. They hurt i-banker's feelings! With their recent corporate cleansing, suits have been made somewhat... unwelcome. Why? Because, according to founder Nick Jones, they're not good for the creative atmosphere.

2.  The photo policy seems somewhat shady. Apparently some poor soul got his ludicrously expensive membership revoked for taking pictures of a toned and buffed Cristiano, but there are photos abound of Soho House floating around the internet.

3. As of late, the carefully pruned atmosphere is known as somewhat of a Euro trash hangout. Perhaps the exclusivity policy is backfiring... 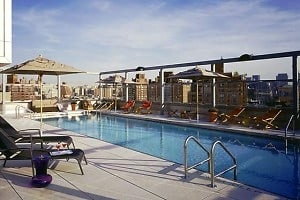 1.  Nestled in the glamorous club and restaurant central that is the Meatpacking District, the location is unbeatable. The views are some of the best in the city, overlooking the Hudson and most of Manhattan.

2. A la Steve Zissou, there's music underwater in the pool! Oh, and it's heated too.

3. The super-hip outdoor bar, aptly named Plunge, is right next door, so snacks and cocktails are free flowing. And there's a never-ending supply of frozen grapes!

4. With its guest-only entry policy, it's up there with Soho House in terms of exclusivity. You can bet that the bar-hoppers at Plunge are dying with jealousy.

1. It's like being in Italy, where checking girls out is the name of the game. One wise pool hopper put it best, saying "We are on a safari, and this is our jungle. I'm here to hunt for meat." Basically it's full of singles on the prowl, so be prepared for a serious pick up scene.

2. Only registered guests are allowed, so you'll have to fork upwards of $300 for entry. Conclusion? New money central.

3. The pool's a bit small, so snapping up the poolside chaise lounge requires an unfortunate early wake-up call. 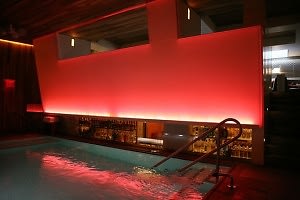 1. At this pool, you don't have to travel far for your drinks. In fact, you don't even have to wade far. You can make like the Caribbean and pick up your margarita at the sexy swim-up bar.

2. It's a fun club atmosphere, all neon lighting and loud music. While you're at it, you can even catch up on some lost episodes of Miami Vice.

3. Should you forget your swimsuit, you can pick up a replacement at the front desk. Talk about convenience!

1.  It's no secret that hotel rooftops are where it's at this summer. Sadly, this pool is indoors, and not particularly tan-friendly.

2. While the club factor has its benefits, it also comes with a set of predictable downsides. It's painfully small, crowded, and full of drunk people on the prowl.

3. It's not exactly your classiest locale, and there's somewhat of a South Beach feel. Think naked pool parties and flowing alcohol... 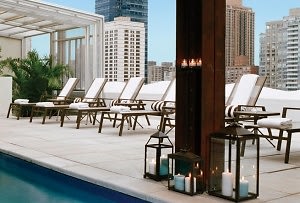 1. Yes, it's yet another aquatic haven in the sky, nestled in the upper west side. However, it's set apart by its size, accommodating up to 150 lucky people on two floors, the pool deck and the pool itself.

2. You can rent a seriously kitted out private cabana. The perks? Flat screen TVs, mini fridges and portable speakers, just to name a few. Because you know, you didn't actually come to show off your free stroke.

4. This historic boutique hotel's got class in spades. It's the ultimate locale for sophisticates who like to swim and sunbathe with lots of luxe.

1. Entry is an exclusive guests-only policy, and is thus somewhat pricy. Standard rooms are upwards of $250 a night, and booking in advance is pretty much a given.

2. The rooms are ridiculously tiny, by the way.

3. It's across from Lincoln Center and next to Central Park, aka tourist-central. There's traffic and noise galore. 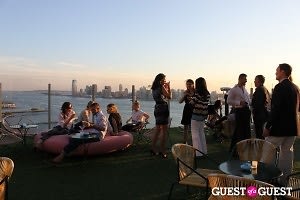 1. The Standard, another Meatpacking District staple, is home to many an epic, invite-only rager. Two words. Party central. From the Biergarten to the Boom Boom Room, all of NY's scenesters can be found here any night of the week. The newest addition to the empire, the rooftop bar/pool, is no exception. Oh, and its name, Le Bain, is french and seductive.

2.  Exclusivity seems to be a general theme in this roundup, and true to form, this rooftop pool is selective to the max, and packed with really really good-looking people casually sipping mojitos.

3.  In case you're in need of more panoramic sights of the city, there are sweet views of the Hudson and the Empire State building. In fact, Le Bain may catch NYC at all of its best angles.

4. The decor is as real as it gets, on a rooftop pool, in a hotel, in the city. You can pretend you're sunbathing in the country, on the acid green grass astroturf. If this is too earthy for you, the bright pink water beds are a choice alternative.

1. The velvet rope permits only the most elite of the upper crust. Models, the titled, the impossibly beautiful, and then some. This hyper exclusivity also means that there's a very real social hierarchy. Go figure.

2. Conclusion? If it's anything like the Boom Boom Room, it's probably a bit of a wait to get in. 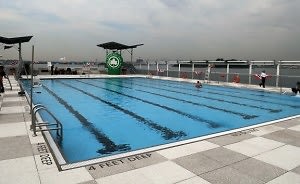 1. In our book, a floating pool is equally as cool as a dumpster pool. This pool floats around on a barge in the Bronx. It's like Tom Sawyer except ten times cooler!

2. Not only can you swim in a pool, in a river (ahh, inception!), admission is delightfully free!

3. Unlike pools in Manhattan, it really is an urban oasis.

1. The pool is divvied up into seven lanes, and while fairly large, is home to people who actually want to swim. And not just sunbathe and look hot.

2. Free admission to the public means there's no screening of all kinds of riffraff. Just kidding. But, it's definitely more of a family-friendly scene, so expect screaming children and million of pool toys.