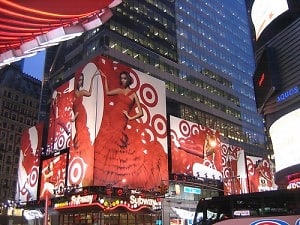 People constantly complain about Manhattan becoming Suburban as if it's a bad thing. Sure, we don't want our streets to look like every other street in America, and it's nice to have unique stores. But there are a few chains that would greatly enhance the quality of life in our fair city.-

There's one in Brooklyn and there's one in Queens, but their shelves are always empty and dusty; these two Targets aren't the clean, sprawling stores of our suburban dreams. Also, a truly good Target will induce the kind of spending and impulse buying that doesn't lend itself to a subway trip. I want to be able to hail a cab and stuff it to the brim with my Target wares, instead of awkwardly lugging it onto a crowded train where people aren't sympathetic to my bags full of pillows and shelving units. There's gonna be a new Target in East Harlem....but East Harlem is even harder to get to by subway.

The Target pop-up stores that sell the latest designer collaborations to Target-starved New Yorkers are always a shitshow. You really shouldn't have to stand in line for hours and shove people out of the way for a $30 dress.

The cruelty of the lack of Target is made worse by the prevalence of Target ads all over Times Square. Can't we get rid of the freaking M&M store and use that real estate for something useful?

Here's the thing, New Yorkers: The Shake Shack sucks. The burgers are fine, the fries are definitely not that good, the shakes are ok. You know what's NOT ok? The prices. You know what is even less ok? The hour long wait. For a hamburger.

In-N-Out first of all tastes better, second of all costs less, and thirdly you won't have to wait more than 10 minutes for your meal.

If you aren't from the West Coast there's a good chance you don't know what Rubio's is, and I think this is a problem that needs fixing in America.

In fact, I've even met people who actually think "Chipotle" is good Mexican food. I try to remind myself that it's just ignorant, that I can judge people who grew up in different circumstances. But the truth is, this is America and it's the 21st Century and there's really no excuse for people to be so uninformed.

Rubio's makes your tacos and burritos to order. They don't put rice in their burritos because that is what amateurs do--just grilled chicken, guacamole, cheese, and salsa.  Instead of just slopping all the ingredients together they actually cook it longer, so that your cheese is melted and your guacamole isn't freezing (which is my Chipotle pet peeve.)

Sometimes, you just need to buy a bottle of wine and some obscure Swedish candy and some Lemon Curd and a lamp shade. Cost Plus World Market has all of these things, and more, at really affordable prices so you don't feel guilty when you impulse buy a Guatemalan table mat. It's sort of like Pier 1, but with food, and if they put one in the East Village, it would do very, very well.

What makes Coffee Bean better than Starbucks? It's all in the powder. Where as Starbucks uses liquid syrups on flavored drinks, Coffee Bean uses powder to create a richer, smoother taste. Supposedly, when the Olsen Twins came to New York for college, they brought with them like 10 jars of the stuff. Another reason Coffee Bean is superior to Starbucks: free internet in every store.

Sure, we have a lot of good, authentic pizza places in New York City. But we also have Domino's and Pizza Hut, so we may as well Bertucci's, which is so much better than the other chains. You get unlimited bread rolls while you wait, even if you're just doing pick-up. They give you raw dough to play with, even if you're not still like, five. It seems like it might be almost healthy, even though it probably isn't. And some of them have Bocce Balls to play with!

We have a Nordstrom Rack now, which is exciting and an improvement: maybe the lines will die down enough by 2012 so that people can actually shop there. Obviously we have Bergdorf's and Bloomie's in the city, but Nordstrom is the best department store, in part because of their Junior's Section, Brass Plum, which is secretly cheap and awesome, even if you're not so "junior" anymore.

These ubiquitous British chains are everywhere in the UK. I used to be ok with them being a "only in London" treat...until I found out that both chains are in Boston and DC.

You guys. We CANNOT let Boston and DC beat us in this respect. I cannot afford to take a Bolt Bus every time I want some Peri Peri sauce/chicken katsu.

Supposedly, "Republic" in Union Square is actually Wagamama. But then why can't they just call it that?

There is one Chick-Fil-A in Manhattan and it is in a freshman dorm at NYU. This means that you have to creepily sneak in to a cafeteria full of 18 year olds every time you want to eat a damn chicken and pickle sandwich! Happily, this is easy to do: the guards at Weinstein (on University Place) never check ids. But sometimes you just want to enjoy some waffle fries without feeling like a creep, you know?

For those of you not from the Mid-Atlantic states, WaWa is sort of like a friendlier 7-11 that serves what fans describe as "the best Hoagies on the planet" and blue raspberry slushies. Don't ask a native Pennsylvanian about Wawa unless you're prepared to listen to them gush for 20 minutes or so. Also: Wawa is a Native American word for goose. Now you know.