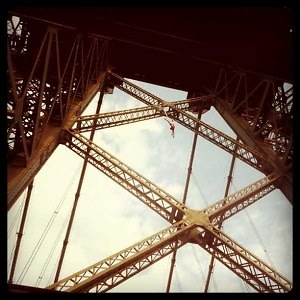 Last night Seanna Sharpe, a Brooklyn aerialist and her friend Savage Skinner caused an artistic frenzy on the Williamsburg Bridge.  The duo performed on a 90-foot-silk rope without a harness.  They hung from the ropes at about 300 feet, until 30 minutes later the boys in blue turned up to arrest the two daredevils (VIDEO Below).  Here's five of some of the craziest (and well-meant) stunts the good citizens of New York have pulled resulting in our entertainment! 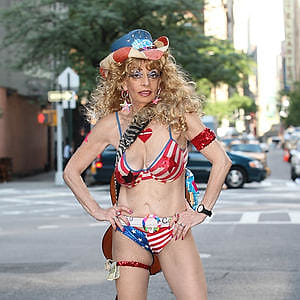 I'm sure you've seen her and her ancient goodies in Times Square! Sandy Kane, a 54-year-old former stripper began her Naked Cowgirl act in 2008.  The Naked Cowgirl received some backlash from her male counterpart, Naked Cowboy after she recorded a song and didn't include him!  She refused to honor his franchise agreement requests because she makes only makes two dollars a picture. 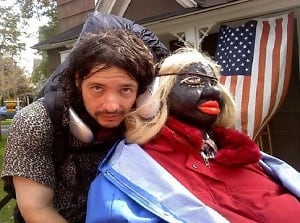 The husband of mannequin Teagan says he met his "wife" in 1986 when she was just a head.  He claims she told him how to build the rest of her body.  The husband and wife travel around New York on a walking tour, while Ned pushes his wife in a wheelchair.  Teagan's "birth name" is Yvonne Savannah Thjodhild-Nefer and she is of Icelandic and Sudanese descent.  Before moving to Watertown, NY where she met Ned, she lived in Haiti.  All of this is information is according to Ned, if there was any doubts of accuracy.

3. 'Racy' bicycle ride through the city 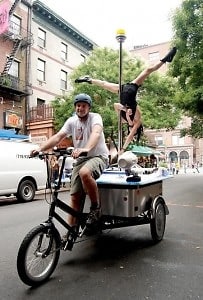 Andrew Katzander a landscaper had the bright idea of The PoleRider.  He uses his bike to transport Marlo Fisken a dance instructor around the city while she twists and turns on an 8 foot stripper pole, complete with a neon platform.  The PoleRiders charge $300 an hour for their services and they hope to do bachelor parties in the future!

4. The Rent is Too Damn High Party 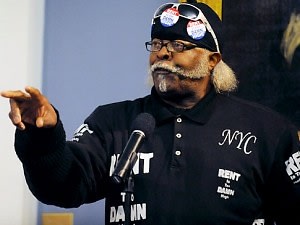 New York resident Jimmy McMillan fed up with the absurd amount of rent demanded by property owners in the city decided to run for Mayor in 2005 and again in 2009.  He started his own political party called, "The Rent Is Too Damn High Party"  He went on the blast the rental rates with his song "The Rent is Too Damn High" McMillan also plans to run for president in the 2012 elections. 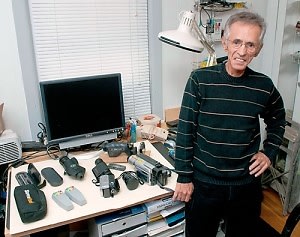 Joseph Capp a 68-year-old retired Brooklyn man is lending an ear to anyone who is tramautized from seeing UFO's.  He says he understands how it feels to see an unidentified flying object with no one to believe you.  He claims to have spotted a flying disk in 1962 on Atlantic Beach.  His hotline is 24 hours, and he says he receives about 40 calls a month regarding sightings in New York.