Optimus Prime and the gang ain’t got nothing on these guys. The Transformerz, New York’s premier break dance team, are the real deal. At 5 p.m. yesterday, I strolled passed Columbus Circle only to see a man in a U.S.A. jersey swallow a cigarette in the middle of a break dance routine he was performing. I held myself back from yelling, “Hey, don’t do that,” as I was more than a little curious to see what happened when he did. He just continued dancing, rotating tricks with the other four members of the team present, and engaging the crowd with witty lines like, “Pay us, cause this keeps us out of two places: prison, and your homes.” 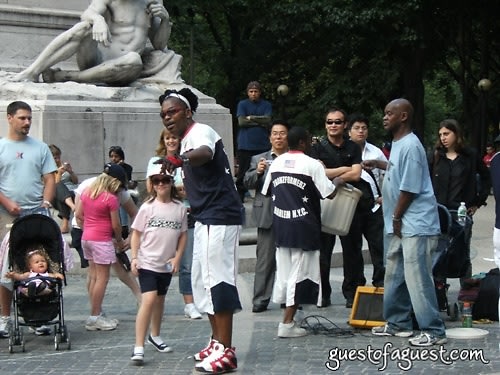 The highlight of the show came as the after-work crowd peaked around 5:30, and the Transformerz called for seven members of the audience to participate. Kids rushed forward and parents feigned calm as a man called “Grass Hopper” positioned them all like dominos and told them to touch their toes, because he was going to jump over them. The crowd started a slow clap and Grass Hopper jogged to the entrance to the park, some fifty feet away, giving high fives to all the kids in the crowd on his way. Then all of a sudden he ran forward, and I could have sworn he was going to stop short, saying to the crowd, “You guys were going to let me do that?!” But no let downs here. The crowd made a noise like New Yorkers watching an accident between two cabs, and it seemed like Grass Hopper was in the air for ages before he landed gracefully on his feet on the other side of the children. The team passed around the money bucket once more and dedicated the show to everyone who was clapping.