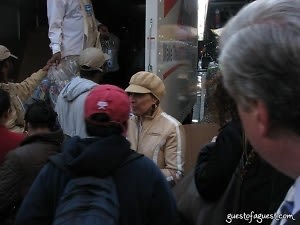 Through the hustle and bustle of New York’s streets in the late hour rush, I discovered a line that traveled halfway across the block of Seventh Avenue between 36-38 Streets. I wish I was not serious when I found out what it was for, but like everyone else who saw this line, I was pretty curious towards what it was about.

Peering over with a craned neck and a fumble for my camera, I readied it as I followed the trail of dozens of line-fixed denizens to find an open truck where the people awaited two fellows in clean aprons that were unloading bags of… vacuum bags? Seriously, vacuum bags??

As I was trying to figure out why, the lines got worse. More people got behind, and with the swell of coming traffic along one of the BUSIEST streets after 5pm thanks to the mingling of tourists and homeward New Yorkers/Jerseyites, I could not get a tight shot. Actually, I could barely even stand. That photo is the best shot I could hope for and that’s saying a lot considering I was taking multiple photos to show people giving away bags and a vacuum sealer (wow, with real working motor!) without being capable of showing just how ridiculous this line was. Vacuum bags! Come on!

Anyway, as the businessmen who made five times more than me swelled around the truck with the locals (I wish I was not kidding here), the fellow behind the truck had to yell to the masses that there was a line and that he would be giving away the free product to those that waited on line. All the while, I could not help but think that there was a better way to execute this than to have an open back of a truck along one of the busiest streets in New York after the 5 o’clock whistle (have I emphasized this enough?). Just for this, you get no product placement from me!

But I guess I can see why everyone wants vacuum sealers. I found the same package they were selling on eBay, and somewhere, someone is giddy with glee that they sold the whole shebang for a grand total of 10 bucks (not including listing fees).