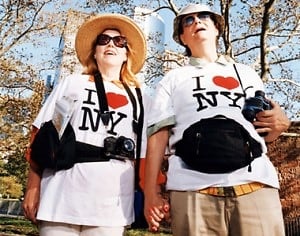 It's August. People are taking time off work, schools aren't in session, and generally everyone seems to be traveling. If you're a transplant to New York, chances are you'll be receiving your fair share of visitors this month, but what to do with them? Here are some cool places you might consider bringing people to show off your cool life in the big city!

Things everyone can enjoy 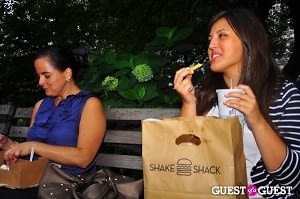 Everyone's going to have different taste in activities, but first off, let's talk about places you can probably bring anybody. For example, who doesn't enjoy a good burger? Though Shake Shack has expanded quite a bit recently (in addition to the ones around here, there are now Shake Shacks in Saratoga Springs, Westport, D.C., Miami and even Dubai and Kuwait City), the original Madison Square Park location is a great place to chill and indulge in some meaty or creamy treats under the summer sun while taking in the beauty of one of Manhattan's lesser-known squares. For some FiDi/riverside action, check out the new Battery Park City location (215 Murray Street), which supposedly has much shorter lines than the ones further uptown. Appropriate for everyone except vegans.

If the Empire State Building is just way too cliche for you (though you should definitely do it at least once), you could try the ever-so-slightly less cliche Top of the Rock, in the GE Building at 30 Rockefeller Plaza. Though there are a lot of tall buildings you can stand on top of around Manhattan, the Top of the Rock brings to the table some '30s Art Deco class and the rich history of the building as a broadcasting landmark because of its ties with NBC. They've recorded countless TV and radio shows over the years in the building's legendary halls. How many tenants of the Empire State Building can you name? Appropriate for everyone except people with vertigo or a fear of heights. [Photo via.]

Girls' night out (with mom)

So you want to have a fun night with a few drinks, but you can't go clubbing like you might on a typical night because, well, you've got mom to deal with. No worries! You just need to take her somewhere fun, and maybe a little non-judgmental. You can't really get more non-judgmental than Lucky Cheng's, the infamous transvestite bar (24 First Avenue) where you'll get catty insults flung at you left and right that all feel weirdly kind when compared to the stink eye you can get from pickier bouncers at shi-shi clubs. So drag queen shows might not be everyone's cup of tea, but if that's the case, why are you hanging out with your parents downtown? Appropriate for everyone with relatively liberal sensibilities. [Photo via.] 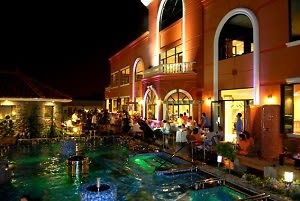 If the delights of urban living just don't suit your party, you might want to give Queens' Spa Castle (131-10 11th Avenue) a shot. "The Walmart of Spas" is a Korean-style megaspa where the admission price grants you access to acres of water features to frolic around (the building is five stories, 60,000 square feet). It's a bit out of the way from most of the city's more tourist-friendly areas, but definitely worth a visit if you relish the thought of lounging all day in a pool of warm water. Avoid the place on weekends when it becomes overcrowded with children.

Guys' day out (with dad)

If you've got an outdoorsy kind of dad, check out some of the city's newer public green space by taking a ferry over to Governors Island (they leave from the Battery Maritime Building in Manhattan or Pier 6 at the Brooklyn Bridge Park in Brooklyn on weekends) and strolling around or renting a bike. The island offers some cool colonial architecture and insight into the city's history, as well as spacious picnicking areas and killer views of lower Manhattan. [Photo via.]

For the Yankees fan that lies inside many Tri-state parents, there's Mickey Mantle's (42 Central Park South), easily the best place in the city to catch a Yankee's game outside of Yankee Stadium itself. Part theme restaurant and part sports bar, this place is like a Hard Rock for the Bronx Bombers, with the walls decked out in all manner of memorabilia from an era before steroids and overpaid players ruined baseball. Don't go for the food (it sucks and it's ridiculously overpriced) but do go for the atmosphere, where you can almost taste the pinstripes in the air. Appropriate for sports fans that hate the Red Sox. 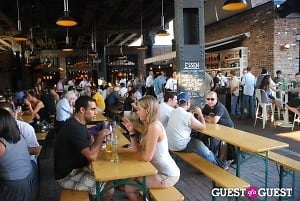 What's cooler in the summer than a nice beer garden? If you'd rather just kick it for a bit and enjoy the great outdoors (while still being allowed to drink), The Standard Biergarten (848 Washington Street) is a nice, spacious platz with a small selection of German beers and snacks (sausages and pretzels) and a killer view of the Hudson. It can get a little rowdy but hey, it's a beer garden in the Meatpacking District. If you're lucky, sometimes the crowd is pretty international, and then the garden has a distinct European sensibility that you don't often find around New York. Rhineland on the Hudson! Appropriate for young-ish people who like to drink and be outside, often at the same time. You could probably even bring mom and dad here on a less-crowded afternoon if they're cool enough. 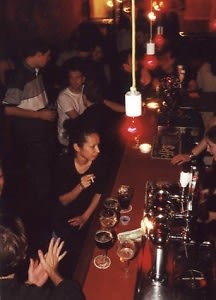 If The Standard is too pretentious for you, check out Vol de Nuit (148 W 4th Street). It's smaller than The Standard's and it lacks the view but it has a much wider selection of beers, with more of an emphasis on the Dutch-speaking side of Europe's Beer Belt. This slightly grungy space tucked away by Washington Square Park features more Belgian beers on tap than you can find at most bars in Belgium as well as serving up classic Belgian street food like frites. (You knew French fries were Belgian, right?) Plus, if you go in August, it's not filled with NYU kids like it can be during the school year. And why would you go to a beer garden outside of the summer anyway? (For colder weather, check out Blind Tiger around the corner at 281 Bleecker Street, which has more than 30 beers on tap from all over the world.) Appropriate for anyone with a passion for brews, even mom and dad. [Photo via.]