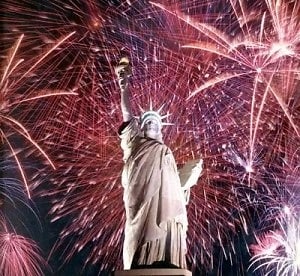 The fourth of July is right around the corner and although New York seems anything but purely American (like the divided sections of the city i.e. Chinatown, Little Italy, etc.), each area of the city has something that has a specific air of Americana.-

In honor of the 4th of July, we've rounded up our favorite pieces of Americana in every NYC neighborhood.

Go to the tavern where George Washington gave a farewell speech to the officers of the Continental Army back in 1783. The historical location is definitely a place to visit and drink a beer where our first president did!

The diner is a classic American restaurant found throughout the country. Engulfed by Chinatown's surroundings, Cup and Saucer's atmosphere and food is truly an authentic diner experience with its low prices and fried foods.

The United States is known for it's preppy looks with polka dots, pink and green stripes, and white pants. For the going to the golf course or country club look, J. Crew is one of the best places to shop.

Bowling became the popularized sport it is today through it's existence in the United States. With it's brightly lit neon lanes and bowling pins signed by Hollywood's stars, Bowlmor is a must visit location to see American sporting at it's best.

At Bills, you will be taken to the days of the 1960s where vanilla milkshakes are the beverage of choice and the decor is checkered table cloths and cushiony, plastic chairs. Besides the fatty foods and back to the future decoration, to make it even more American the house cheese is no other than American Cheese.

Living out of RVs and trailer parks are exclusive to the United States and there is nothing to be ashamed of. At Trailer Park Lounge and Grill, you will get a piece of America's trashy lifestyle with the random toilet bowl outside, juke boxes, Elvis lamps, and vibrant colored Tiki lights.

The New York landmark is made patriotic with it's top lights changing to American colors of red, white, and blue. In addition, there is a great view of the Macy's Fourth of July fireworks near the area.

This museum honors and holds of one of America's greatest ships, the Intrepid (CVS-11), which was a vessel for World War II, Vietnam, and the Cold War. In addition to featuring the Intrepid, the museum also commemorates the nation's hero and American history.

If you were a child growing up in the United States, you played with or at least knew of American Girl dolls (if not, they are dolls that represent different time periods in American history). You can even make your own dolls that look like you now! Why not honor the fictional characters that reflect our country?

For a new and modern twist on the American diner, visit Schnipper's Quality Kitchen. The menu is simple with classic diner favorites like mac and cheese, sloppy joes, hamburgers, fries, hot dogs, and PBR.

Justin Timberlake's restaurant is one place you must check out to enjoy America's southern and summer time meal: barbecue. Wooded booths and tables and light up beer signs make eaters feel like they are down south.

There is nothing more American than apple pie! Bubby's Mile High Apple Pie is some of the best of the sweet treat in the city in addition to other southern eats like buttermilk biscuits and cheese grits.

The Apollo is a landmark in New York and in the United States. Some of history's most legendary African-American artists like Billie Holiday and Duke Ellington, and comedian Bill Cosby have performed here. It is a spot that embodies American talent.