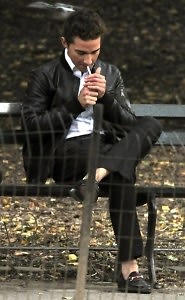 City Councilman Peter Vallone Jr. of Queens stuck his neck out yesterday in an attempt to stanch the flow of anti-smoking legislation coming out of City Hall. Valone proposed designated smoking areas in NYC parks as a compromise to a looming ban. Will Central Park rangers (just imagine they exist) soon add "smoking or non-smoking?" to their repertoire?

A cigarette ban in New York's parks and beaches would be another inevitable fallen domino in the cascade toward eventual outright prohibition. But Mayor Bloomberg's proud march toward a cleaner, healthier future for New Yorkers might have the unintended side effect of inducing nostalgia in the city's human chimneys.

I was only 19 when smoking was abolished (sometimes successfully) in local bars and clubs in 2003. I can barely remember a time when restaurant maîtres d' asked incoming guests if they preferred the smoking or non-smoking section. And forget about lighting up in office cubicles, movie theaters or airplanes--that's reaching back into Mad Men territory from the twenty-something's perspective.

Vallone employs common sense, a trait rarely seen in politicians, in his argument for a limited crackdown:

""If there's a very large park and a very small smoking section, I think it's going to be tough to argue you're going to inhale somebody else's smoke."

Never mind the bigger problem with the ban: the near-impossibility of actually enforcing it across the city's 1,700 parks covering more than 10,000 acres. Vallone's plan is a striking marriage of quaint and progressive. Chances are it will go up in smoke. If it does, you know where to go.