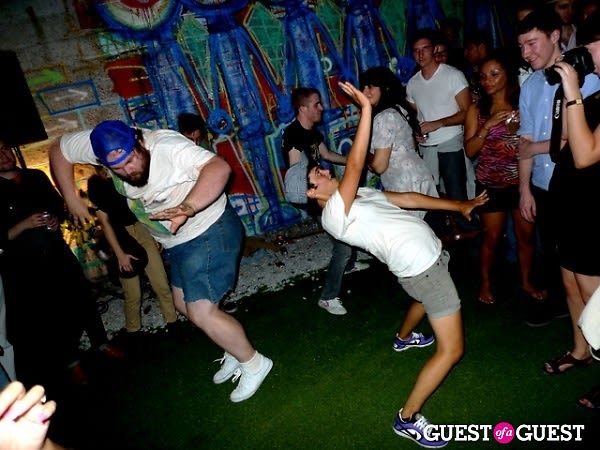 Go HERE for more photos by Nicole Wasilewicz and tag yourself and your friends!

The outdoor courtyard, semi-hidden on the south side of the hotel, manages to keep it's wits about it, combining your usual Soho Grand fare with, well, NYU uniform clad kids and hipsters alike. This past Friday at the finale of the Summer Hummer series was no exception, with an extra dose of the latter.

As we arrived, 6th Avenue was already echoing with drum beats and crowd howls induced by Javelin, the Brooklyn-based DIY duo with a knack for live sampling ironic classics-- Friday night's standout being Mariah Carey's "Always Be My Baby".

Seemingly an unlikely fit for the posh hotel, Friday welcomed a highly saturated crowd of the laid back music industry ilk, including sightings of various members of bands such as Blonde Redhead, Twin Shadow, and Apache Beat, as well as a slew of music bloggers.

It may have been the jamz or the extra dose of Brooklyn in the house, but once a couple of power failures got handled, JD Samson brought the DJ heat and a dance-off of extreme proportions was born-- with an appearance by our favorite dude of summer '10, spotted at last week's Jelly Pool Party.

Here's hoping that next year The Yard will actually be able to open that pool, and that the GrandLife margaritas don't get any stronger than they already are.