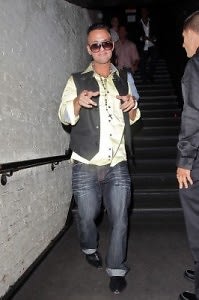 All of Jersey's finest came out last night to Tenjune to celebrate Mike "The Situation" Sorrentino. At first glance, the party was a small gathering of friends, family and a slew of girls in skin-tight outfits hoping for a photo-op with The Situation. 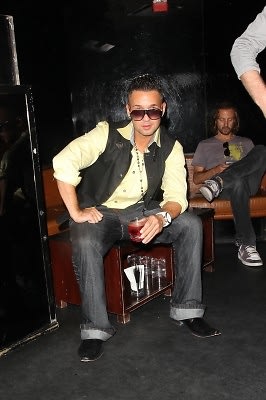 The party got off to a slow start, but once I saw that first popped collar at 9:15, I knew the night was about to officially start.

The Situation made his entrance with a posse of fabulously bedazzled, gelled out juice-heads as he made his way to VIP area flooded with red, green and white balloons (reppin' the Italian flag). Although Snooki and Pauly D were nowhere in sight, The Situation did take shots with fellow cast-mate Vinny Guadagnino.

Throughout the party, a slide-show of The Situation was projected on the wall. Unfortunately there weren't the expected baby pictures or awkward 8 year old sports team shots.. But there were plenty of pictures of him on the red carpet with random celebrities and of course solo shots of him pointing to his abs, an appropriate tribute to "The Situation's" persona. 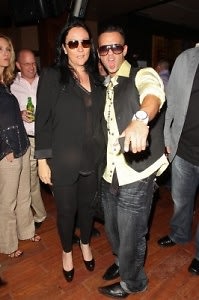 In attendance were some of the cities hottest djs (Dj Phresh and Class, Dj Vh1, Fatman Scoop and The Disco Fries to name a few). Kelly Cutrone also randomly attended the Birthday bash with Liz Gately (creator of The Hills, The City etc..) Kelly spent most of the night posing with The Situation and going up to all her fans (even the extra orange ones) and proved she could fist-pump with the best of them.

The real treat came towards the end of the night with his birthday cake. Everyone got a piece of The Situation that night, literally, as the cake was a true to scale mold of his infamous abs (totally appropriate if you ask me). 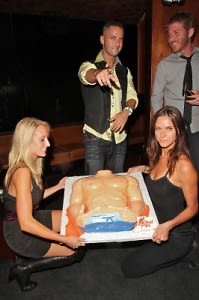 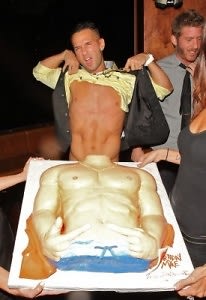 Between signing random girls cleavage, doing the classic point and pose all night and literally eating his own abs I think The Situation's birthday bash was one for the history books...

Images courtesy of Crushable and StarTrak