Anne Hathaway isn't really a fixture on the New York nightlife scene, but apparently she's in town and felt like let loose, because last night she made it out to two parties. Not bad, Annie....-

Where: The Metropolitan Museum Of Art

Other Details: The Obama traffic meant that a huge majority of the guests were late. Gisele seemed to be in a great mood, happily posing for pictures with fans before dinner, and pledging $50,000 to the Brazil Foundation. 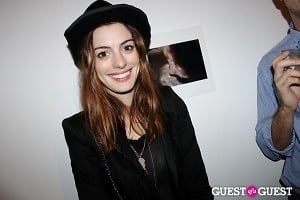 Other Details: The Mexicue truck was parked outside; Anne Hathaway, wearing a top hat, sipping Dos Equis inside.

Other Details: People flipped over the documentary on Bill Cunningham, calling it a must-see for anyone interested in fashion and style.

Other Details: Party was hosted by Christie's and Lanvin.