Katie Couric danced at the Plaza, Betty White videoed it in, Rosie O'Donnell and Arianna Huffington handed out Matrix Awards, Robert Redford screened his new film, Chris Rock gave the NYT's something to struggle with, Courtney Love viewed designer clothes and much more. Find out what happened last night!

Other Details: Kate Lear was given the award for Civic Inspiration and the Creative Inspiration Award went to Sonia Manzano of “Sesame Street” fame. The evening included a sit down dinner and a performance by the Ballet Hispanico and their students.  The Spanish Harlem Orchestra also played, entertaining the 450 guests and encouraging them to take to the dance floor. Katie Couric was spotted busting a move with Ballet Hispanico artistic director Eduardo Vilaro. [Via] 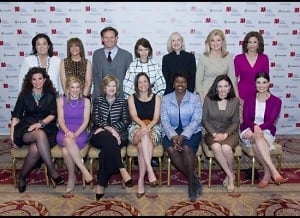 Other Details: The Matrix Awards honor "extraordinary achievements of outstanding women in the communications industry." Sheryl Sandberg, Cindi Berger, Gwen Ifill, Robin Koval, Idina Menzel, and Abbe Raven were honored onstage at the Matrix event, which included a live video appearance by Betty White, who received a lifetime achievement award, and a surprise performance by John Legend. Arianna Huffington was on hand to present an award and is probably feeling a bit of the sting of irony as news breaks today that a group of volunteer bloggers has filed a class-action suit against her for not compensating them for content. [Via] 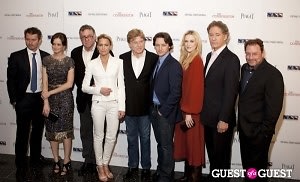 Other Details: The celebs came out last night in honor of Robert Redford's new film staring James McAvoy and the ageless Robin Wright.  It focuses on the untold, true story of Mary Surratt, who was hanged for allegedly being part of the conspiracy to assassinate Abraham Lincoln. It's interesting, but long and drags at parts since the script focuses heavily on the courtroom trial. After the film, guests head over the the Royalton Hotel. James was given congrats by tons of fans and Robin hung out near a banquette drinking champagne with Evan Rachel Wood. Redford himself showed up late to the event and made his rounds. Take a look at more photos HERE. 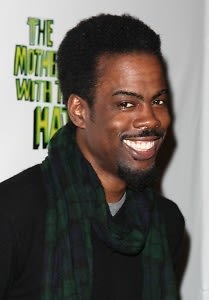 Other Details: Stephen Adly Guirgis new play starring Bobby Cannavale, Chris Rock, Elizabeth Rodriguez, Annabella Sciorra and Yul Vázquez, opened last night. It's got love and soberness and drunkenness and a hat. But most of all it has Chris Rock, which convince you to go see this. The NYT gives it a rave, though is apparently not allowed to publish the swear word in the title, giving the article a great Mad Libs quality. As evidenced by our earlier post titled "Steve Aoki Gives Champagne Showers From A Mother F%$king Boat" GofG does not suffer from the same problem. [Via] 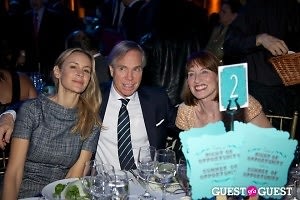 Other Details: Guests dressed for an evening to remember for the Night of Opportunity benefit dinner at Capitale. The event benefited The Opportunity Network and featured Tommy Hilfiger as the keynote speaker along with his wife Dee Hilfiger. Get more details HERE and look at more pictures HERE.

Marchesa at The Apthorp

Other Details: Looks like Cortney Love needs a new wardrobe after selling her things off on eBay. She stopped by the Apthorp last night to check out Georgina Chapman and Keren Craig's wares.

Other Details:Russian art is hot right now. Sotheby's just held a sale and last night Christie's jumped in the fray with an estimate of sales in excess of $5m. There are  paintings, silver pieces marked with the imperial warrant and a large selection of Fabergé objects, from sapphire-and-diamond cufflinks to gold-and-enamel cigarette cases.