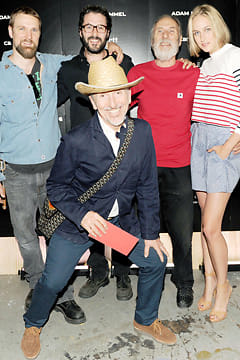 Other Details: Last night GLAMOUR magazine celebrated its August cover girl Heidi Klum and brought out all of fashion's celebs and figures.

Who Was There: ROSTAM of Vampire Weekend

Be sure to check out more pics HERE.

Who Was There: Parachute and Jesse Ruben

Other Details: Guest enjoyed hors d'oeuvres and beverages provided by Tequila Avion and Heineken. All proceeds from the event benefit the Christopher & Dana Reeve Foundation's and their mission of curing spinal cord injury and improving the quality of life for people living with paralysis.

Other Details: The event was to celebrate the mag's Scratch & Sniff 10th annual photo issue. The cover features a scratch-and-sniff photo of naked people that are, well, scratch-and-sniffable. Complimentary drinks were provided by sponsors KRÜ Vodka and Kopparberg Premium Pear Cider. DJ Vito Fun provided the tunes for the night's celebration.

Who Was There: Power Slug's DJ duo, Headband and Hooligan

Be sure to check out more pics HERE.