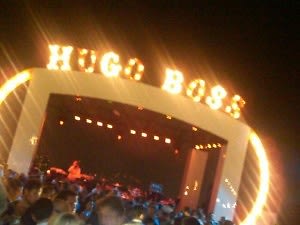 Other Details:  Cee Lo Green took to the stage on the roof of Hugo Boss to perform five songs for the crowd. @LauraLaneNYC tweeted:  "Cee Lo arrived at the party w/ an entourage 25 deep. Wearing flip flops w/ a diamond watch. Like you're style." [Via]

NYC Premiere of Fox Searchlight Pictures' ANOTHER EARTH and After-Party

Where: Landmark's Sunshine Theater, Top of the Standard

Other Details: Guests came out to the 2011 Sundance Jury prize and Alfred P Sloan prize winner Another Earth. The movie stars Brit Marling as a young MIT student and William Mapother as a composer expecting his second child. Everything is great until the discovery of a duplicate Earth. Which whoa, great movie for stoners. After the screening guests head to Boom Boom Room. The guys from vampire Weekend were in the house, one of whom rocked his sunglasses at night. [Via]

Other Details: Pharrell Williams launched his questionably named liquor product for ladies last night, Qream. His Qream is all for you girls. Here's the pitch. Does it make you want to drink this? "Qream was created for contemporary women who work hard and want to relax with friends at the end of the day. I want them to reward themselves deliciously. Women make up half the population and Qream is about celebrating that power." [Via]

Other Details: MAC approached Gareth to do a collection after many seasons of successful runway shows and an installation at Milk Studios. He tells Fashionsita:  “If I was going to do something with MAC I wanted it to be something special, and quite specific. The collection is very all-encompassing and versatile. It has the scope to go to the extreme with it. You can really play around with it."

An Evening With ENTOURAGE

Where: The Paley Center for Media

Other Details: The night after screening the first episode of the final season of Entourage, the boys hit Paley to talk about the show and it's ending. It will be interesting to see what happens to the actors and if they fade out or move on to bigger and better things.

Other Details:  Last night Born & Bread, a fashion and lifestyle blog run by Lauren Abuaf and Julie Lagrotteria, hosted a summertime soiree at the Lower East Side's recently opened CO-OP Food and Drink. Guests enjoyed cocktails, hors d'oeuvres, and mingling with the site's fashionable co-founders, as well as designers and other fashion industry insiders. Be sure to check out more pics HERE.