Things may be slowing down as we inch towards Christmas, but there are still plenty of spectacular events being held around the city!  Angela from "Whose the Boss," got her bowl on, Ne-Yo helped out foster kids, Spike Lee signed books and more... 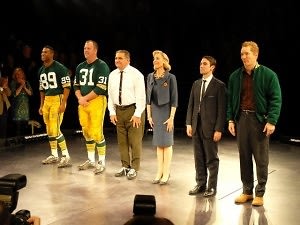 Who Was There: Thomas Kail, Keith Nobbs, Judith Light

Other Details: The cast of of Lombardi didn't go to Bowlmor to show off their skills on the lanes. Instead, they watched the Green Bay Packers vs. New England Patriots. It makes sense! The play is about Vincent Lombardi, a man who helped turn Green Bay into the most dominant NFL team in the 1960s. The show's web site claims that you will like it even if you don't know anything about football (doubts) and that it is suitable for both children and grandparents. [Via]

Who Was There: Ne-yo

Other Details: Ne-Yo is doing his X-mas good. The rapper has partnered with The Boys & Girls’ Club of America and Toys for Tots to collect toys for foster children. As part of the effort, Ne-Yo is auctioning off a number of things from an appearance in one of his video to a signed replica of Michael Jackson's sequined glove. Haven't you always wanted a signed replica of Michael Jackson's clothing?

Spike Lee book signing of  "Do The Right Thing"

Who Was There: Spike Lee

Other Details: Spike Lee signed copies of his new book, "Do The Right Thing," which celebrates the 20th anniversary of the landmark film. It takes an insider’s look with behind the scenes images and details. Spike not only gave his John Hancock but also answered audience questions.  [Via]

Other Details: Former NBA star Jayson Williams's wife Tanya Young Williams has written a motivational workbook based off her real life struggles after her husband fatally shot a limo driver in 2002. She celebrated the launch with her two daughters and a host friends at Juliet where she signed copies of the lengthily titled self-help book.