Kevin Spacey hung out with Jon Lovitz and Stephen Baldwin, Wee Man hit the bar with David Arquette, Donna Karran showed off her high-fashion arm cast, and Jay McInerney hosted a party at the 21 Club. It was bright lights in the big city last night! What else happened? 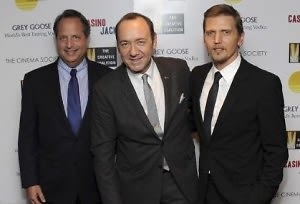 Other Details: Kevin Spacey plays Jack Abramoff, the corrupt GOP lobbyist who goes down hard when he tries to peddle influence during the George W Bush years. Corruption and murder is involved. Spacey has been battling gay rumors for years, but the whole "Is he, isn't he?" is currently making headlines.  Read what he told us about it HERE. [Via]

Holiday Reception for LINE UP 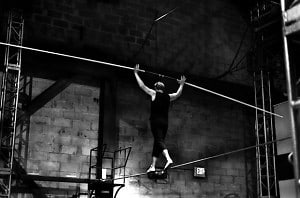 Who Was There: Philippe Petit, Victoria Dearing, Christo

Other Details: Clic Gallery celebrated their new show LINE UP: RIGGING KNOTS + GLIMPSES OF A MASTER CLASS, which offers a offers a rare peek into the world of renowned high wire artist Phillippe Petit. Christo and Petit immersed themselves in deep conversation for almost the entire evening. Could a collaboration be on the horizon? [Via] 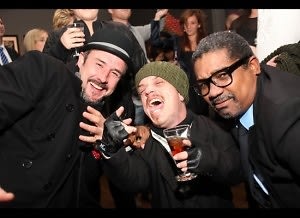 Other Details: David Arquette seemed in high spirits despite his ongoing divorce and possible mental break down.  He actually didn't say anything completely inappropriate about the demise of his relationship with Courteney Cox. Nice work!  Donna Karran showed up in a high-fashion cast after breaking a bone in the Outback. Wyclef Jean, who was declared ineligible to run for his homeland's Presidency, did his part by performing.  Wee Man stopped by as well, adding to the entertainment. Guests bid on auction items and took a look at photos of Haitians by Marc Baptiste. [Via]

Who Was There: Young Patrons

Other Details: The YPLC got together and celebrated their enthusiasm for the arts with cocktails, snacks and some discount shopping. 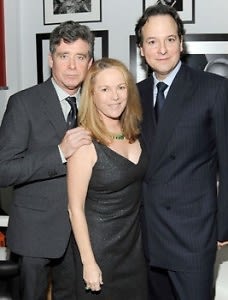 Other Details: It was bright lights, big holiday party last night at the 21 Club where guests dined, had cocktails and enjoyed conversation.  It was the poshest event of the night. Kerry Kennedy was certainly having a busy evening, showing up here and also at the Urban Zen event for Haiti. [Via]