Justin Bartha took the stage for Zach Braff's new play; Paz de la Huerta took in a movie and hung out at the Boom Boom Room; Nanette Lepore and other fashion types joined the CFDA for movie night; Melanie Fiona sang for a crowd at Le Bain and more! Last night's parties were belting out their own tune!

Other Details: Zach Braff's latest ode to the Garden State has been in previews for weeks, sparking rumors of a romance between Justin Bartha and newly divorced Scarlett Johansson when she came o see him perform. Last night marked the official opening. Second Stage Theater said in a news release that the play chronicles a heartbroken man who retreats to the resort community of Long Beach Island, N.J., in the middle of winter, only to have his solitude “interrupted by a motley parade of misfits who show up and change his plans.” After the play, the cast and guests head to HB Burger to celebrate. [Via]

The New York Red Carpet Screening of THE DEVIL'S DOUBLE

Where: SVA Theatre/Top of The Standard

Other Details: British cutie and Amanda Seyfried ex, Dominic Cooper, who sang his way into our view in Mama Mia, shows off his darker dramatic side in this film about Saddam Hussein's psychotic son, the notorious "Black Prince" Uday Hussein and the man who played his double, Latif Yahia. Based on the true story, it also takes liberties, turning the tale of brutality into a Middle Eastern version of the gangster flick replete with women, fast cars, and gold plated trinkets. Dominic, playing both parts, shows he has real acting talent and the flick keeps you on the edge of your seat the entire time. It's good.  I saw it and most often I'll always tell people to wait for DVD, but this is well worth the price of a ticket. After the film, guests head to Top of the Standard for drinks. Paz De la Huerta was there, proving she is not banned from the spot after getting in a cat fight with Samantha Swetra there, and, dressed conservatively in pants and a blouse, that she can make it through an evening without a nipple slip. Maybe court scared her?  [Via]

CFDA + W Mag Screening of Women on the Verge [Take a look at more pictures HERE!] 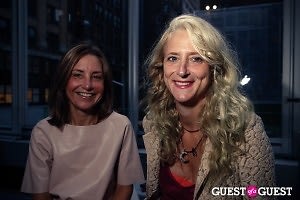 Who Was There: Fashion peeps

Other Details: The CFDA and W Magazine held their Monday Movie Night at Bar Basque. Fashion types were treated to a screening of Pedro Almodovar’s 1988 movie Women on the Verge of a Nervous Breakdown and tapas from Chef Yuhi Fujinaga. Be sure to take a look at more pics HERE.

Where: Le Bain, The Standard

Who Was There: Melanie Fiona, Allison Hagendorf, DJ She Rock, Steve Madden

Other Details: Steve Madden Music’s Summer Concert Series hosted its second event last night. Melanie Fiona took the built out stage at Le Bain for an acoustic performance of hits like "Ayo" and "Give It To Me Right" as well as tracks from her upcoming album “The MF Life”. She also paid tribute to Amy Winehouse, covering “Back to Black,” “Valerie,”and “Tears Dry on Their Own.” In case you missed it, here's video: