Last night was so highbrow! The tops of the totem poles of Fashion, Literature and Food graced the hoi polloi with their presences at various events around the city, leaving little time for the wild partying we've been seeing lately. Grab your pipe and read about what happened in New York last night...- 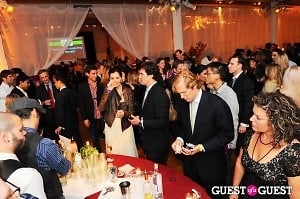 Other Details: The food got more attention than the drinks at this party. It's to be expected for such a foodie event, but deeffffffinitely not the New York norm.

Other Details: Gay Talese checked in his fedora, and only his fedora, at coat check. This may seem unremarkable, but we think it's old-school and awesome and something we won't ever see again once his generation dies out. (Sorry, was that uncomfortably depressing?)

Other Details: Elie Tahari is the latest designer to get a Saks "boutique", and to celebrate, he, Ronald Frasch and Katie Cassidy hosted a cocktail party on the fourth floor of the storied department store. [via]