Martha Stewart celebrated another year older; artist Hunt Slonem showed off his new studio; Jackson Rathborne promoted his new flick; Justin Timberlake and Mila Kunis came out to the Top of The Standard for casual sex and more. Last night's parties just wanted to get off. 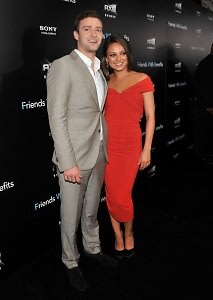 Where: The Ziegfeld Theater, Top of the Standard

Other Details: Last night the beautiful people came out for the Justin Timberlake and Mila Kunis version of Ashton Kutcher and Natalie Portman's No Strings Attached, the casual bang movie, Friends With Benefits.  After the flick guests head to the Top of the Standard where Penn Badgely showed off his new, much improved (in my opinion) scruffy look and Courtney Love held court from her perch atop the bar.  [Via]

Other Details: Martha Stewart's daughter Alexis  invited over a high powered group to her impeccably decorated apartment to celebrate her mother's birthday.  And while we haven't heard any reports on the food, we are guessing it was divine.

Other Details: Artist Hunt Slonem, known for his abstract paintings of butterflies, birds, and bunnies, held his 60th birthday party at his new studio on the west side. A whimsical whirlwind of color, guests, and one sequined drag queen, walked amongst the paintings, colorful glass, and antique furniture. [Via]

Other Details: Jackson Rathborne, who was in Twilight, OMG, took some time off from touring with his band 100 Monkeys to promote his new movie Girlfriend. [Via]

Other Details: Fancy types came out to celebrate Byrdie Bell's cover of the July issue of Avenue with dinner and conversation. [Via]

Other Details: StartupLife and Laugh Fiend Productions teamed up for the Tech Comedy Ball Fights Cancer to benefit Gabrielle's Angel Foundation for Cancer Research. There was, as the name suggests,  comedy, networking, and dancing and tons of fun! The event was hosted by Emmy Award winner and birthday boy Louie Torrellas.

Other Details: BOFFO, a nonprofits arts organization, honored Pere Marino. There was dancing, a silent auction, and some swank gift bags.