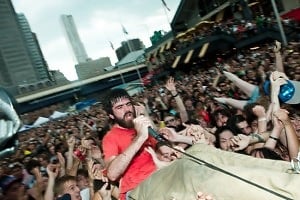 Paul McCartney brought the Beatles back to life during his weekend concerts; Rock of Ages celebrated 1000 performances while somewhere, Tom Cruise channeled their energy; the Village Voice debuted the 4Knots Festival; and people partied in the Ganservoort pool to the sounds DJ NVM. This weekend's parties made a splash.

Other Details: Village Voice's Siren Festival on Coney Island was replaced this year with the 4Knots Festival at the much closer, South Street Seaport. Titus Andronicus, The Black Angels, Oberhofer, Davila 66, Mr. Dream, Eleanor Friedberger (of The Fiery Furnaces), all took the stage for the day long festival that also included DJ sets by Dan Deacon. and my personal favorite, Yeasayer. Rock on! Check out more details and pictures HERE! [Via]

Other Details: Sir Paul McCartney took the stage at Yankee stadium Friday and Saturday night, playing a number of Beatles songs and some Wings favorites. According to Brooklyn Vegan, he even paid tribute to his late Beatle-bandmates John and George. He brought out a ukulele for one song and told a story about how George Harrison had a period where he was really into ukuleles.[Via] 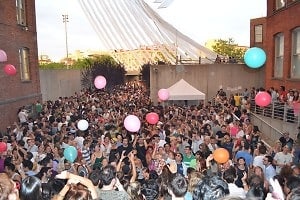 Other Details: Warm Up continued this week with performances byAudio Love by Juan + Johnny, Joakim, Koudlam, and Mirror Mirror. Guests came, drank beer, sat on haystacks and showed off their best Euro clap on the dance floor. Be sure to take a look at the pictures HERE.

Other Details: Rock of Ages celebrated their 1000 performance this weekend with cake and lots of congratulations. Meanwhile, somewhere in Malibu Tom Cruise was channeling their energy as he practiced for his upcoming role in the film version. This picture is priceless.   Tom Cruise=Badass. [Via]

Other Details: While the New York Post ran some tests on the Gansevoort pool that showed it wasn't the cleanliest of places to immerse yourself, the club did counter and it looks like they convinced the masses. DJ NVM took the decks at their weekly summer series party to a packed house. [Via]