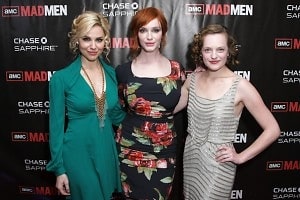 Last night, as you settled down to watch the premiere of Mad Men from the comfort of your couch, did you know that the entire cast (well, the important ones, minus John Slattery) were gathering at the 21 Club to watch the show themselves? - 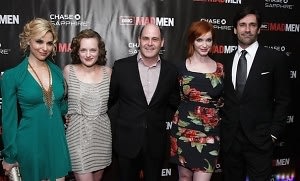 Who Was There: Jon Hamm! Christina Hendricks! Elisabeth Moss! Matthew Weiner! Cara Buono who plays Dr. Faye! Jennifer Westfeldt who has the distinction of sleeping with Jon Hamm every night!

Other Details: Hamm arrived with longtime girlfriend Westfeldt, Hendricks arrived with husband Geoffrey Arend, and poor divorced Moss arrived alone. (Whatevs, we never liked Fred Armisen for her anyway!) Extras were hired around to walk around in costume as employees of Sterling Cooper Draper Pryce. (Obviously, we are in the wrong line of business if we could have gotten paid to walk around Jon Hamm in a 60s costume last night...)

Other Details: Stephen Colbert gave a hilarious intro for Stephen Doyle, who designed Colbert's book. (Doyle, in turn, delivered his acceptance speech in verse.) Kate and Laura Mulleavy accepted the award for best fashion designer, and throughout the evening industry winners spoke of making design part of the public vernacular.

Release party for special edition of "The Darjeeling Limited"

Where: House Of Waris

Other Details: Well, the House of Waris was a fun experiment, and we hope it comes back! This weekend they ended things with a party for The Darjeeling Limited. (Waris himself plays a role in both The Darjeeling Limited and in the Natalie Portman short which preceeds the film, Hotel Chevalier)