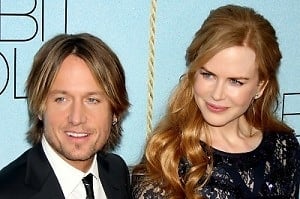 Other Details: Fresh from crediting Nicole for saving his life from the cozy comfort of Oprah's couch, Keith Urban showed up to support his wife and her new film Rabbit Hole. The couple looked cuddly on the carpet holding hands. Nicole both acts and produces the flick which is based off the play. After reading a NY Times review of the Broadway hit while at a coffee shop in Nashville, she called the writer and it was a done deal without her ever seeing it performed. For the ladies out there, YES, Aaron Eckhart is much more handsome and charming in real life.  [Via]

Other Details: Chairs Liz Lange and Deborah Roberts celebrated and honored the achievements of Room to Grow families. Guests enjoyed cocktails, a silent auction, and the chance to see Uma Thurman in the flesh.  [Via]

Other Details: Last night's concert, with keynote speech by Twitter co-founder Jack Dorsey, was held in honor of Witness, Peter Gabriel's Brooklyn-based nonprofit group that aims to use video to bring attention to alleged human rights abuses. If you see something, film something. “Whenever there was video of this it was way harder for people who wanted to hide it to get away with it," he said. But he's no Julian Assange. He thinks Wikileaks went “too far and will probably do damage.” [Via] 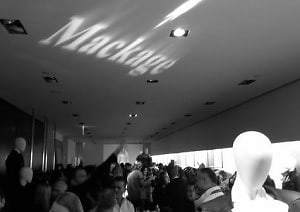 Other Details: Canadian outerwear brand Mackage opened its first U..S store. Gene Simmons showed up. Gene Simmons!!! Need I say more? Shannon Tweed popped over after taping an appearance on the Joy Behar show. A shopping event will take place at the store this Saturday offering customer who spend $150 a free leather case. [Via]

Other Details: John Legend and Christine Teigen love bowling, so much that the supermodel was one of the few partygoers to trade her stilettos for bowling shoes and really go for those strikes! This packed, VIP party played some great 80's hits while celebs and socialites bowled, sipped Prosecco, and eventually hit up the dance floor. To see GoaG complete coverage, click HERE.

Where: The Sunglass Hut Flagship on Fifth Avenue

Other Details: Prada introduced the first collection of customizable sunglasses.  Customers like Jessica Stam, who may or may not have been out on a date with Kanye West this week,  had the option to choose the letters and symbols on the temple of the oversized frames in black, white or tortoiseshell. DJ Kiss spun. [Via]

BILLBOARD'S WOMAN OF THE YEAR AWARD

Other Details: Billboad honored Fergie at this years awards ceremony, where she said “I am sad that my mother is not here for this momentous occasion. But I’m taking her to watch the Black Eyed Peas perform at the Super Bowl." Lea Michele took home the first ever Triple Threat Award. [Via]

Where: The Times Center

Other Details: The New York Times launched its membership-based club which offers opportunities for members to attend screenings of restored classics and new films. Last night they viewed Black Tulip, acted and directed by Sonia Nassery Cole. [Via]