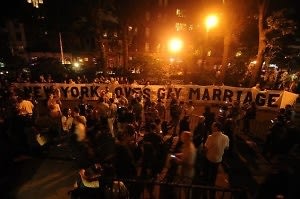 With the passing of legislation to legalize gay marriage in NYC and the planned festivities surrounding Pride Weekend, Friday-Sunday was a rainbow celebration full of glitter, feathers, leather, fireworks, and Love from Christopher Street to Pier 54 to newbie Westway!

Other Details: As the announcement was made, the Empire State building lit up in rainbow glory as people took to the concrete to celebrate. Revelers on Christopher Street held up a "New York Loves Gay Marriage" banner, amongst other signs, while many head to Stonewall to ask other bar goers "Will you marry me?" and toast the pioneering moment. 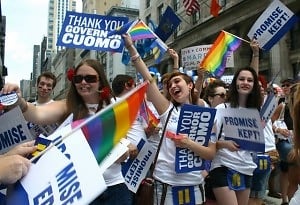 Other Details: This year's Gay Pride Parade held special significance as hundred of thousands all over the city celebrated the landmark legalization of gay marriage. Take a look at pics from the rainbow of victory that spread over Greenwich Village!  The new law's champion, Gov. Andrew Cuomo received cheers and thanks from the crowd, which stood ten people back in some places and included throngs on fire escapes and rooftops. Be sure to take a look at all the photos HERE!

Born This Way At Westway 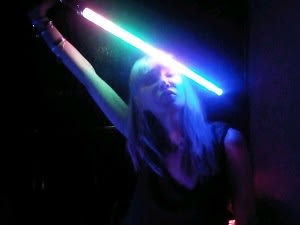 Other Details: Matt Kliegman and Carlos Quirarte's new club Westway ended off their first open week with a Born This Way shingdig for Gay Pride Weekend. Sophia Lamar hosted the event that drew out a ton of people, including, oddly, Shia LaBeouf. Don't be a drag just be a Queen! [Via]

Rapture on the River 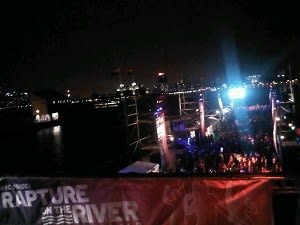 Other Details: Ladies head over to Pier 54 following the Dyke March for some dancing. Comedic acts took the stage, DJs Susan Levine and Mary Mac spun tunes, and there was a Wet T-Shirt Contest. Rosie O'Donnell was in the house! @juicypinkbox Tweeted post-event: "Thanks for coming out to Rapture on the River! We had like THREE THOUSAND hot, sweat lesbians there! wooooooooot!!!!!"[Via]

Other Details: Hey Queen, Spank, Xanadude & Earl Dax combined forces to take over both rooms of Public Assembly, The Loft, and Cubana Social for an evening of DJs, bands, art, and a special video screening by  Ryan Trecartin.

Other Details: Crowds gathered to dance dance on Pier 54to music by DJ Lina, DJ Vito Fun, and Ana Paula. @mulletkiller Tweeted: "15 mins at the pier 54 dance and ive seen two c-list celebs and a man that looks like a gnome. Thank you NYC." At the end of the night, there were fireworks! In case you missed it here is the far-less-exceptional-than-seeing-in-real-life video. 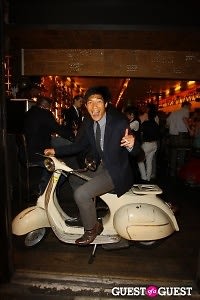 Other Details: A group of friends celebrated a different kind of pride at Veloce: having survived NYC for ten years! Drinks and food were had, the retro Vespa out front was taken for a ride, and a worthy accomplishment was honored by party-goers.  Be sure to take a look at more pictures HERE.

Drink The Deal Kick Off [Take a look at more pictures HERE!] 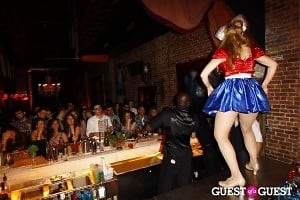 Other Details: To celebrate its launch, DrinkTheDeal hosted an event att Albert Trummer's newest mixology heaven, Theater Bar. Guests enjoyed finely crafted cocktails and a live performance from Thomas Jefferson & His Ragtime Orchestra, which was supposedly a "comedic account of the life of the third President told through 1920s-style arrangements of current pop hits." It has a 2011 Helen Hayes Award recipient and American Idiot alums Alysha Umphress and Leslie McDonel.  Be sure to take a look at pics HERE! 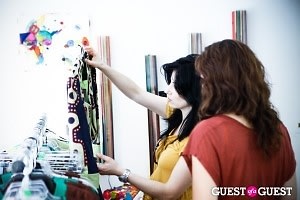 Other Details: House Rossil & Sobral Trunk Show allowed guests to get their shop on. Designs are constructed from traditional African fabrics with modern silhouettes.  Be sure to take a look at pics HERE!

Slovenia in US [Take a look at more pictures HERE!] 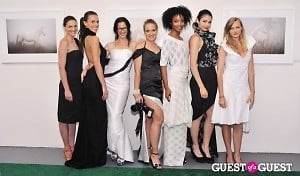 Other Details: Guests came out to watch a fashion show of vibrant colors, enjoy Baked by Melissa Cupcakes, and Slovenian wine. Be sure to take a look at pics HERE!