Just because it was freezing cold this weekend, doesn't mean people stayed in or slowed down. Steven Soderbergh screened his new documentary, Park Avenue lit up, celebs hit the rink at Rockefeller Center for some family fun and more...

"And Everything Is Going Fine" Premiere 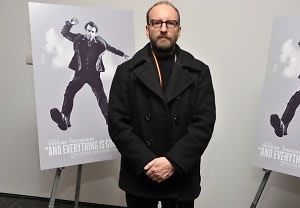 Other Details: Soderbergh's new doc concerns the life and work of Spalding Gray, who made a career as a writer, actor, and monologist. Gray's widow, Kathie Russo, and his children were involved in the project and on-hand during the screening. “At the very first meeting I had with Steven to discuss making the film, he said ‘I want Spalding to tell the story of Spalding,’” Russo has said. "I handed him 120 hours of Spalding footage, which became a 90-minute documentary, all told by Spalding through the eyes of Steven Soderbergh." [Via] 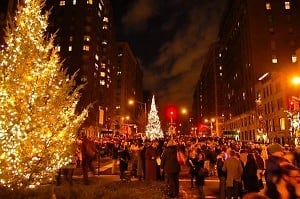 Where: The Brick Presbyterian Church

Who Was There: Brick Presbyterian Church Pastor Michael Lindval, children

Other Details: The fir trees along Park Avenue from 54th to 96th Streets were lit for the 65th time this year. The ceremony not only serves to get families in the holiday spirit, but also to memorializeto those who have lost their lives defending our country. [Via]

Where: The Rock Center Cafe at Rockefeller Center

Other Details: Christina Milian brought her daughter, Violet, out for the ABC event that ties into the networks "25 Days of Christmas," otherwise known as "Harry Potter All The Time" programming. Attendees wore Santa hats and took to the rink to show off there skating skills. [Via]

Who Was There: Ricky Van Veen, John Mayer

Other Details:  Friends of College Humor head made it out to the Financial District. John Mayer was there, standing around with a drink waiting for pretty ladies to come over and admire his wonderland. We're pretty sure he didn't have to wait too long.