People may be leaving town for Thanksgiving, having their private parts canoodled by the TSA before sitting down to turkey and cranberry sauce with grandma, but the city isn't slowing down one bit. Susan Boyle hit Rockefeller this morning, Steve Martin signed his new book, foodies turned photogs, and more... 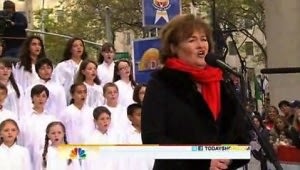 Who Was There: Susan Boyle, Hudson River Children's Choir

Other Details: Susan Boyle performed "Perfect Day," "Do You Hear What I Hear?" and "Holy Night,"  this morning on the Today Show. She was backed by the Hudson River Children's choir and joined in a duet by Amber Stassi the winner of Susan's Search. Fans held both signs and cardboard cutouts of Susan's head. [Via]

Other Details: Richard Johnson may be leaving Page Six for Rupert Murdoch's new iPad only The Daily, but NY Post Editor-in-Chief Col Allan wants to show he has no hard feelings.  There was another going away party in October at 675 in the Meatpacking District.

Steve Martin an "An Object of Beauty" Book Signing

Where: Barnes and Noble

Who Was There: Steve Martin

Other Details: The wild and crazy guy signed copies of his new book "An Object of Beauty," which is a fictionalized account of the inner workings of the art world. The reviews are in and the critics give it a thumbs up.

Where: Wine and Roses

Who Was There: Cindy Guyer, Michael Wachs

Other Details: Cindy, the 'Female Fabio' who has appeared on over 200 romance novel covers, held a viewing party for her Millionaire Matchmaker episode at her own restaurant. Patti's pick for her intended, Michael, was present.  While the pair occasionally still go on dates Cindy seems more concerned with stardom, having stated "I'd love to do a show with [Bravo] called Cindyland or something." Andy Cohen has gotta eat that up.

Other Details: Food Spotting Hooked up with Levi's Photo Workshop to teach people how to take perfect images of their culinary masterpieces just in time for Thanksgiving feasting. It was also perfect for those who are dead set on winning Domino's free pizza photo contest. [Via]