Last night was all about wining and fine dining as well as rooftop partying. From the Phillipe Blond's birthday extravaganza, the annual L.E.S Cirque pop-up restaurant to the City Sip L'ete Noir cocktail to our own Pop-up party at Tiny's, we've got you covered on all the activities of last night. 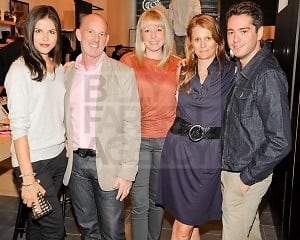 Other Details: Yale Breslin and Emily Weiss helped bring in the celebration for Vogue and The Gap's 1969 collection.

Other Details: Phillipe Blond celebrated his birthday at the "On The Top" rooftop at Le Bain. Guests enjoyed a custom-crepe stand, Phillipe jumped out of a large birthday day cake as the grand entrance, Susanne Bartsch dancing on the bar and  Talk about a large blow out! [via]

Where: Hotel On Rivington

Who Was There: Famed chef Craig Hopson, Nick Mautone

Be sure to take a look at more photos HERE and HERE.

Other Details: The private screening for "William & Catherine: A Royal Romance" is of course based off of the beginnings of the love affair between the Royal couple William and Kate.

Be sure to take a look at more photos HERE. 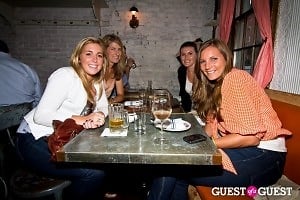 Where: Tiny's and the Bar Upstairs

Other Details: We took to Tiny's and the Bar Upstairs for a good 'ole after-work bash for this week's pop-up. Guests enjoyed the ambiance with old exposed brick walls, dim lighting and antique-looking furniture while sipping on cocktails and beer.

Be sure to take a look at more photos HERE.

Who Was There: The Rapture

Other Details: Sponsored by Budweiser, the event was to celebrate the oncoming Fall season and the magazine's 75th issue. Music and fashion collided for the night as guests and NY's trendy scenesters partied to DJ sets by The Rapture and Main Attrakionz.

Who Was There: Ashley Palma, Humberto Leon