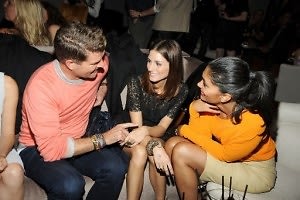 So last night in New York, movie stars went through hell, aided only by vodka cranberries, some Bravo stars got Glaad, and socialites learned all about The Social Network...-

Other Details: It may be because of all the buzz that The Social Network has gotten, but this has to be one of the most heavily attended movie screenings in a long time. Guests kept confusing Cameron and Tyler Winklevoss for their movie counterpart (Armie Hammer), so props to the casting director for that one. Also, West Wing fans will be happy to know that Aaron Sorkin and Janel Maloney were reunited at the after party. 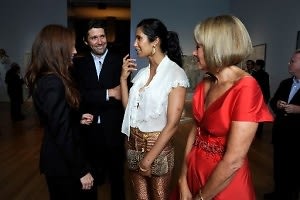 Other Details: This show is curated to mimic Dante's progression from hell to heaven, using works by Damien Hirst, Jeff Koons, Takashi Murakami, Andy Warhol, and Andre Serrano. Champagne and vodka cranberries (random choice...) were served as guests wound their way through the at times inspiring, at times terrifying art. Julianne Moore and Padma Lakshmi were both eager to pose in front of Damien Hirst's piece constructed entirely with multicolored butterflies...a sounder choice than his fleas on resin piece in the other room....

Other Details: Event was hosted by Avenue Magazine. The show itself was an antique hunters heaven: everything from rugs to jewels to paintings. We even saw a robot or two....

Who Was There: Bryan Batt, Bethenny Frankel, Andy Cohen

Other Details: Byran Batt, of Mad Men fame, was host. Bethenny had her camera crew in tow...

Who Was There: Chinese pianist Lang Lang, high (high) society types and patrons.

Other Details: Lang Lang played an encore after being given a standing ovation and literally having flowers thrown at his feet. Afterwards, a dinner was served at The Waldorf Astoria.