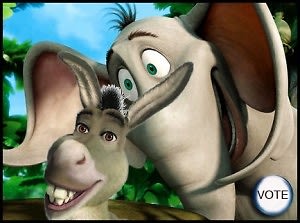 Okay guys, maybe you\'ve made up your minds, maybe you haven\'t.  But tonight\'s probably the last time we have a chance to hear both of the candidates together, speaking in more than 30-second bites, till the election (excepting Obama\'s pre-empting Knight Rider on the 29th).  So we urge you to grab a few friends and watch tonight, at home or at one of the below gatherings.  And for Emily Brill\'s political preferences click here.