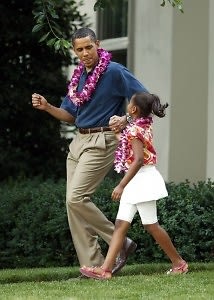 [U.S. President Barack Obama dances with daughter Sasha as they walk from the Oval Office to a luau, or a Hawaiian feast, on the South Lawn of the White House for members of Congress and their families in Washington, June 25, 2009. Photos via Getty]

We've had enough bad news for one week haven't we? From Farah Fawcett and Michael Jackson, to our failing economy and the revolts in Iran; and don't even get us started on this weather.  If we're all going to hell in a hand basket, we might as well try and have a little fun along the way, right? And if he (President Obama) can take a break for a bit, so can you! More from the White House Luau below... 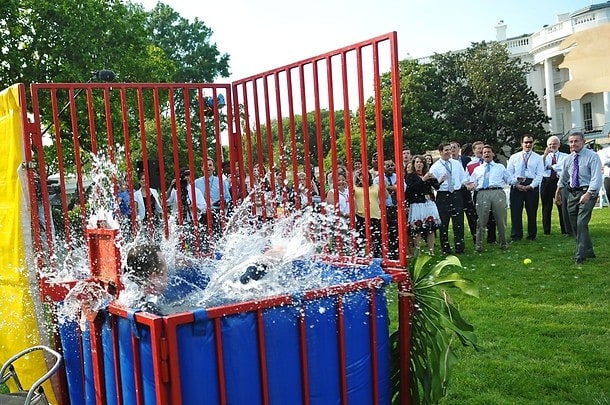 White House Press Secretary Robert Gibbs falls in the dunk tank after a ball was tossed by a reporter ahead of a luau hosted by US President Barack Obama on the South Lawn for members of Congress and their families June 25, 2009 at the White House in Washington, DC. 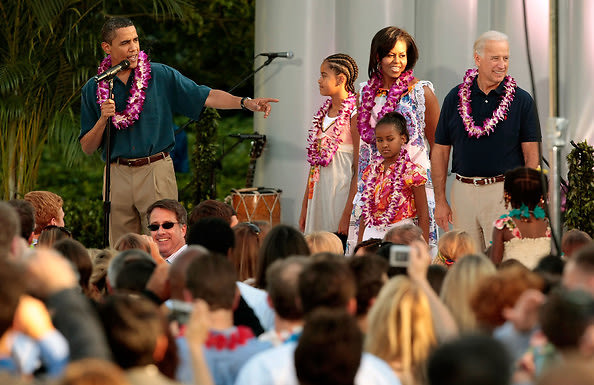 Sporting leis, (L-R) U.S. President Barack Obama, Malia Obama, Michelle Obama, Sasha Obama and Vice President Joe Biden host a luau for members of Congress and their families on the South Lawn of the White House June 25, 2009 in Washington, DC. In a celebration of the president's home state, the South Lawn was decorated with tiki torches and palm huts and the meal prepared by famous Hawaiian chef Alan Wong.