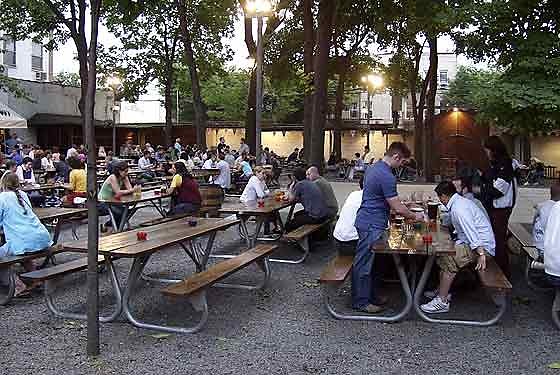 Before the weekend began its rapid descent into Monday, I made it over to the Astoria Bohemian Hall beer garden for some outdoor futbol action on the big screen. This Sunday was the quarterfinals and, while the beer garden's owned by Czechs, there were plenty of Italians and Spaniards on hand to celebrate one lucky team's victory in the Eurocup game. Every surface was covered with plates of bratwurst, plenty of Hoegaarden, and enough kraut to choke a horse- all of which was to be expected.

What wasn't so expected was the giant plexiglass barrier that hung from the beam above us to ensure that no one's bratwurst-fueled futbol rage splattered on the screen, thereby causing the rest of us to hogtie and gag the unlucky soul. Apparently they've had problems with over zealous sports fans in the past, so instead of bouncing them out, the beer garden lets them pelt the plexiglass and egg on fellow drinkers. Upside: the more beer thrown, the longer their bar lines get. Brilliant!