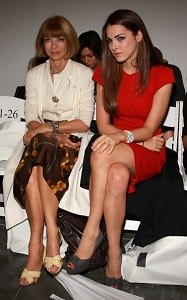 Bee Shaffer may be the daughter of Anna Wintour, ruler of the world, but that doesn’t mean she’s not afraid to roll up her sleeves like the rest of us. We hear that the young socialite will begin working her cute little buns off as a lowly assistant. Graydon Carter need a new PYT to accompany him around Monkey Bar? Maybe Martin Scorsese wanted help with a new film? Nah. Bee’s lucky new boss may surprise you….

It's Ricky Van Veen, the College Humor co-founder is really stepping things up. Van Veen cares more about Yacht Rock parties than he does about UES galas, but with his new job under the direction of Barry Diller, it's time for him to get serious. Enter Bee.

Word on the street is that Bee got no preferential treatment in the hiring process. She went through a typical round of interviews just like the other candidates...."She's not afraid to do grunt work." -says a source

Whether you're buying it or not, we are excited to see what influence Bee has on Ricky, and vice versa. Will Ricky start wearing Prada suits? Will Bee start appearing in goofy internet videos? We'll be watching...