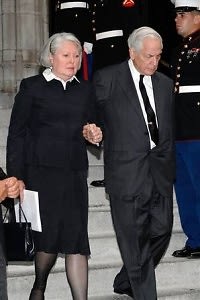 The Astor verdict is in, Anthony Marshall has been convicted.  The late society chronicler Dominick Dunne is most certainly sitting in social Heaven quite disappointed to have missed the haute monde trial of the semi-century.  The case involves the late Brooke Astor, an upper east side dowager renowned for her class and altruism, and her son Anthony Marshall, 85, who allegedly attempted to defraud his Alzheimer-impaired mum out of $60 million dollars (already pledged to New York charities) with the help of real estate lawyer Francis Morrissey, 66.

The original complaint not only shocked the social world with the alleged betrayal of a beloved social icon by her own son and heir, but also detailed a state of squalor in which dame Astor was allegedly rendered by her plotting son and his wife.  The report makes Grey Gardens look like the Taj Mahal and Edith Beales' last days seems like paradise.

This sordid tale ensnared the who's who of the social world, including Vanity Fair's Graydon Carter, Oscar De La Renta, and many others who were summoned to testify before the court.

Update: Sentencing to be held on December 2nd.