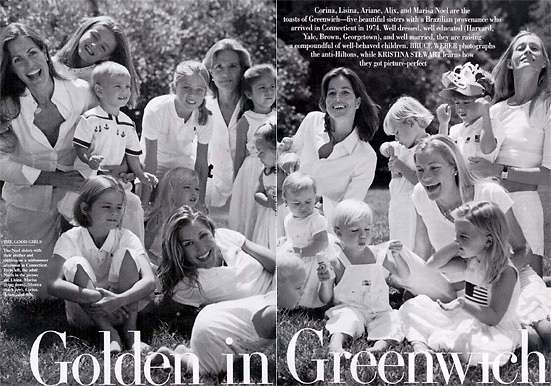 The Noel Family Photographed by Bruce Weber in 2002 for Vanity Fair's "Golden in Greenwich" article.  Photo via NYMag

When the news broke that Walter Noel of Greenwich was Bernard Madoff's top salesman, losing some 7.5 Billion dollars of investors money in the now infamous ponzi scheme while his firm earned some $500 million in fees, society writers all over the world began frothing at the mouth.  The story simply has Vanity Fair written all over it. And this is of course no coincidence.  Mother goose Monica Noel has been manufacturing PR for the family for the last 2 decades.  Since starting out with glorious Christmas cards and lesser known glossies, their self-styled Yupi porn reached the pages of Vanity Fair in 2002.

And now a tipster writes that the same hand that feeds is looking, well to be fed.

Graydon Carter is literally licking his chops as if he were about to eat a plate of $65 macaroni and cheese with truffles at the Wavery Inn.  Vanity Fair has effectively given the Noel family an ultimatum.  "Work with us, and you will at least have control over your side of the story.  Don't and what will be written will be whatever is available in the public domain...:

Never the gluttons for schadenfreude, we certainly hope they get a fair shake when the glossy expose pushes its way to newsstands.  But they certainly have an uphill battle due to their social abundance in previous years.  Finding pictures on the internet of these very tall women is not a hard task.  And what exactly is "South American sophistication" anyway?  One of the sisters Alix Noel Taub recently told Page 6 "We are not press-hungry people".  If this is to be believed, then these very well could be famous last words.