We're still spinnnnnninggggggg from last night, and it's not because of any fashion party we attended. Sure, it was nice; attending Fashion Rocks in Rockefeller, Seeing the band Zander play at Tavern (away from their usual Gramercy Hotel spot), stopping by Alexander Wang's after party on 37th st, and dancing at Pink Elephant....They were all equally stimulating...But the highlight of the evening BY FAR was running into Zelda at Bungalow 8. 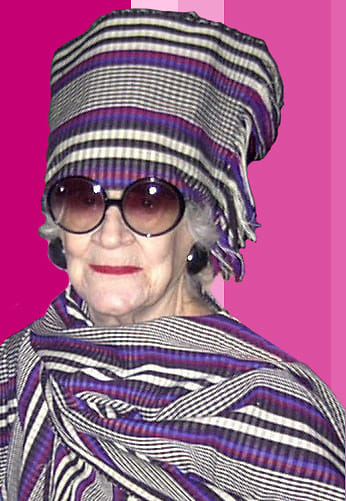 Lohan, Paris, Spears....all amateurs, and Amy Saaco doesn't even come close to competing with the reign of Zelda Kaplan, New York City's 91 year old party-girl. She's also a socialite, humanitarian, designer, seamstress, and most reliable promoter around. From Sacco to Mulholland, everyone that's anyone wants to have Zelda at their party. And chances are she will be there at least once during the week. Talk about an empire, this woman's presence is downright magical. You literally have to personally experience a night around her to have any idea what we are talking about. 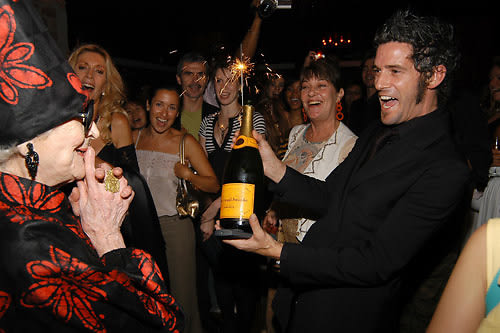 While the other girls are trying to get Patrick McMullan to document their birthday parties, Zelda is having hers actually THROWN by the guy (her latest one is pictured above). Village Voice editors spent one night with her and literally couldn't keep up. She never wakes before 2am, likes younger people because they don't complain about health, and hates when girls wear jeans out saying, "they look like such clones!". She also never thought that she would make it past her 70's. Well she's definitely made it, and has done it in style while raising the bar through the roof, making 90 the new 25. Because of Zelda, now we know that life won't be over when we "grow up" and we love her for that.

“I think one of the things that keeps me healthy is that I’m not introspective at all. The secret is being interested in things outside of oneself.”

-As quoted in NY magazine's Profile on the Legend.