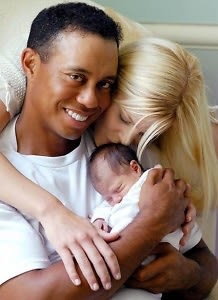 We now turn to golf enthusiast Stephanie Wei to weigh in on Tiger's departure from the game (he's taking time off to "mend" his marriage): Like the rest of us, Tiger’s colleagues are reflecting on his leave of absence from golf — here’s a round-up of some of the more interesting comments:

“Contrary to what everybody believes, the tour will go on, but he will be sorely missed, there is no doubt about it. You take probably the greatest competitor we’ve seen in the game out of the equation [and] it’s going to be a downer. It’s going to be tough for everybody.” —Chris DiMarco

THE LOOK ON THE BRIGHT SIDE:

“I think the mystique has gone. He is suddenly, and I hate to say it, more normal now. Let’s hope golf is not damaged by that. It shouldn’t be…It will have an impact on every tournament Tiger plays. There was an aura, but that has been split. It gives you more opportunity of winning these events.” —Colin Montgomerie

THE DISAPPOINTED BUT OPPORTUNISTIC:

“I’m a big fan of his, a friend of his, and I miss him. I love watching him play, like everyone else. The good news for the rest of us is it’s going to be a lot easier to win tournaments without Tiger playing. But we need him out here. What he’s done for our tour and golf over the last 13 years is unparalleled, really. Whenever he comes back, hopefully it’s smooth sailing and he’ll be better than ever.” —Mark Calcavecchia

“I don’t think it’s going to help anything, that’s for sure. Especially with the recession we’re in now. It’s hard enough to find sponsors, and now without Tiger it’s going to be a challenge…I think there will be an effect. We all know that. There is an effect when he doesn’t play in a tournament, let alone taking time off. He has been golf since he turned pro. And he’s delivered on all of the expectations and more.” —Nick Price

THE THIS IS PARTIALLY OUR FAULT:

“I think it’s unfair how we have built him up over the years. Obviously on the course he’s one of a kind. No one really know what he was like off the course. He’s a tough guy to get around. He has his own little group. I know him strictly basically on the professional level, at tournaments, some of those team events. But I think it’s a little unfair how we judged him. And really, shame on us for thinking that’s all he went home to do, think about golf and practice and that was it. You know, so it’s a shock. It’s most definitely a shock to everybody to hear what’s been going on. But, you know, hopefully he gets it straight. Staying away I think is a great thing to get his family life in order. There’s no question we’re gonna miss him out here. Hopefully he gets his priorities straight and gets back soon.” —Steve Stricker

“What he did was totally wrong and he’s got no one to blame except himself. That’s up to him if he wants to get his family life in order. It’s a hard thing to come back from.” —Craig Parry

THE VOICE OF REASON:

“My advice to him last week was that he should have come out a lot earlier, told the truth, got it all out…He definitely screwed up. I think a lot of people are in shock. Everybody has to realize that Tiger Woods is a human and he was put on a pedestal of being non-human…They always say there is no one bigger in golf than the game itself. But Tiger is. I hope we get him back soon. Golf needs him.” —John Daly

THE DON’T DRAG ME INTO THIS MESS:

“I am a straight-up sort of person. I tell it like it is. Last year, at the same particular point of time, is when I had the confrontation with Phil Mickleson [the world’s No 2 ranked golfer]. I didn’t lie about it – I called the guy a prick. I never said I didn’t call him a prick. I never denied one word of what I said…I had no knowledge of what Tiger’s indiscretion was. And for Rick Reilly to turn around and say that I am a liar and there is no way I couldn’t know – and that I should be fired – that is sensational journalism at its height right there. I am an honest person. I had no knowledge of what was going on [with Tiger]. If I did, I would say I did.” —Steve Williams

“If he doesn’t return, it’s a scary vision. It’s a very scary vision. We’re under no illusion how prosperous we’ve been with Tiger Woods playing in our era. There are a lot of global stars on their way up. But they’re not quite ready to replace Tiger.” —Graeme McDowell

THE I WANT ANSWERS BUT I DON’T WANT TO TALK ABOUT MY OWN PRIVATE LIFE:

“The tour has got to be worried, because what’s the definition of ‘indefinite’? Does indefinite mean, ‘OK, it might be a year because a lot of issues have got to be resolved’? That’s the word you’ve got to kind of drill in on.” —Greg Norman

“No doubt we’re gonna miss him. But he ain’t bigger than the game and he’d probably [be] the first one to tell you that.” —Boo Weekley

“He has not said he is not coming back. And he’s by far the best player in the world. When he does come back, he will continue to be No. 1. And he will be expected to win golf tournaments immediately.” —Ian Poulter

I’d really like to hear what Phil Mickelson has to say — but he probably can’t be reached for comment because he’s too busy reveling.