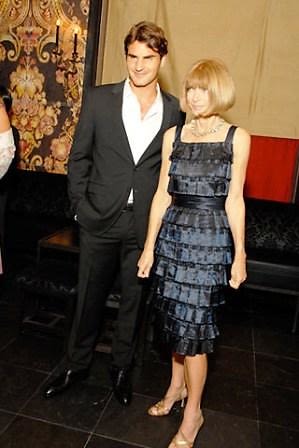 It's not surprising that the editor of the number one fashion magazine would have good taste. Anna Wintour knows. when. something. looks. good., and 25 year old Swiss Tennis Pro Roger Federer is no exception. Wintour, an avid tennis player herself, wears Federer around her arm as well as any de la Renta gown she's donned. Her affection for the young tennis star is anything but secret. Last Thursday, months after making him the cover boy of the Men's Vogue May/June issue,

Wintour threw a dinner party for him at Ian Schrager's Wakiya at the Gramercy inviting all of her friends, she escorted him around to meet the likes of Jimmy Falon, Rachel Weisz, Dylan Lauren, DVF, Vera Wang, Ivanka Trump and Jared Kushner, Donald Trump, Oscar de la Renta, Bee Shaffer, Lauren Davis, and Marc Jacobs, among others. 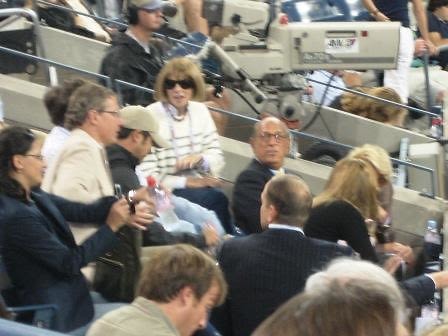 It seems that Anna will do anything to be in Federer's radar, and last night was no exception. We spotted her to our left at the U.S. Open last night where her male muse quickly took out Paul Capdeville from Chile. Roger's arms seem to send Wintour spinning out of character. In a recent interview when asked about her favorite tennis courture this season, Anna replied "Anything that Roger wears" with a girlish giggle. Anna Wintour giggles girlishly?! While inconspicously gazing on the fragile fiesty fashion queen, we at various points caught her smiling, removing her sunglasses, and *gasp! even LAUGHING! (Shown above with her son Charlie Shaffer behind Oscar de la Renta and wife Annette, next to Mirka Vavrinec, Roger's manager and GIRLFRIEND, yes that's right, he's taken). 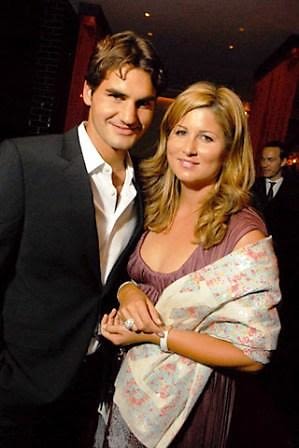 Roger fell for Miroslava (Mirka) at the Sydney 2000 games where they both represented Switzerland. She retired in 2002 after a serious foot injury, but stays in the game by managing Federer's curls both on and off the courts. We have a feeling that she's okay with sharing her man with another woman, especially if that woman can get her in the front rows next week at Bryant Park. 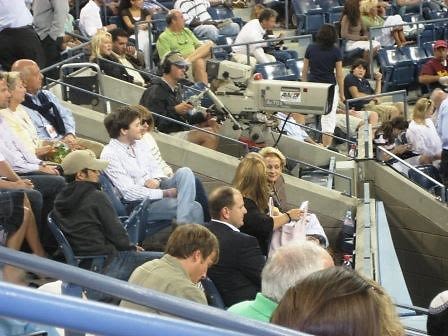