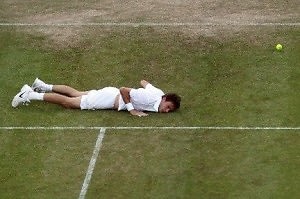 Ten hours and 163 games in so far, the fifth set alone has gone longer than the previous longest match in history, the six hours and 33 minutes between Fabrice Santoro and Arnaud Clement at 2004 Roland Garros. The fifth set is now in it's seventh hour and counting (it resumes at 10.30am EST)

There is not a record that has not been obliterated by this match, and yet there is still more to come. Over 10 hours, the longest match ever played, anywhere. The longest set. The most games in a match. The most aces (individually and combined). Isner, the American 23rd seed, has belted 98. Mahut, the French qualifier forced to nervelessly play catch-up for so long, and to save four match points, has hit 95.

Um, we think the fact that either of them hasn't decided enough was enough, wanting their Pimms and strawberry and cream and to get the hell off the court- shows there is really more to these two (until now) unknown tennis players and their Energizer Bunny attitude.

So who are these two fighters in white in the biggest battle since Rocky and Apollo Creed? 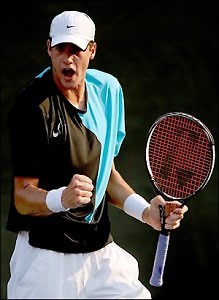 In corner number one, we have the American John Isner. Born in Greensboro, North Carolina, the 25 year old has just recently achieved his career-high rank of #19 on May 10, 2010, and is currently the number-two ranked American tennis player behind Andy Roddick.

Having only won one title before (in Jan this year), he has not progressed past the 4th round of a Grand Slam before.

Even is he does not reach the heights of this historic match again, we can see a bright future of stamina based sponsorships (think Energizer, Red Bull, Gatorade or any other product that is meant to last the distance). 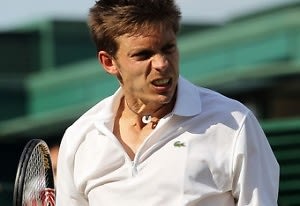 He has never won a career title, having come close in 2007, when he beat Rafael Nadal in straight sets at the Queen's Club Championship only to lose to Andy Roddick in the Final after holding a match-point.

He has not progressed past 3rd round of a Grand Slam before - proving this really is the match of both of these player's lives!

We can't wait to see how this match plays out (excuse the pun) along with all the other players at Wimbledon who are fixated.

Novak Djokovic:  ''Everybody's watching it in the locker rooms, everywhere."

Roger Federer: ''I love this! I know they're maybe not loving this, but I guess this is unheard of in our game. … It's so impressive to see. I was watching this. I don't know if I was crying or laughing. It was too much.''

Venus Williams: "It's a marathon...it's longer than a marathon!"

John McEnroe has controversially advocated that Wimbledon introduce a fifth-set tie-breaker rule like the US Open, preferably at 6-6.

But Federer said: ''I think it's perfect the way it is. It's unfortunate these guys are going to be a little bit tired tomorrow and the next day and the next week and the next month.''