Checking in with Weiunderpar's Stephanie Wei: My timing (for once) was perfect on Tuesday. I showed up at Bethpage around 9:00. I got there right as Tiger Woods was hitting his second shot from the 18th fairway to the green. The ball took a few hops and then hit the flagstick. OMG!!! Well, not really. At this point, we've seen Tiger do the unthinkable a gagillion times. The guy is unreal. And in case you were wondering, he made the 8-10 foot putt for birdie...

It was only a practice round, but from the sound of the roars, you would have thought it was Sunday. A premonition of things to come? Quite possibly.

I watched him stripes balls on the driving range after he played. Wowzers. His swing was looking solid. What knee injury? He had surgery last fall? Say what? I'd say he's recovered. We're in for some drama this week.

Aside: how many times will Tiger hear some drunk jerk fan screech 'GET IN THE HOLE"? Way too many. It makes me want to...nevermind. Take note: that's high on the "annoying spectator behavior" list. Just saying. 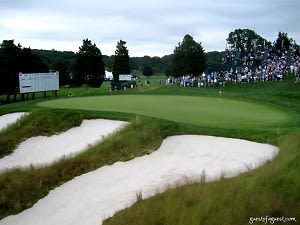