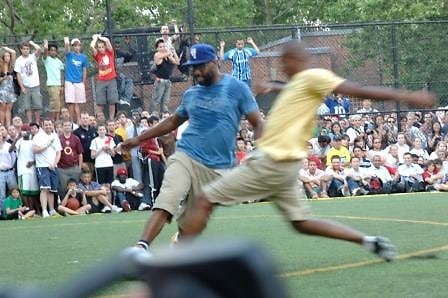 It finished 9 to 4 but it really did not matter –Showdown in Chinatown was a great show of soccer and true fan participation that New York has not seen in a very long time. Over 3,000 people gathered at Nike Field on Wednesday, June 25, to see the greats cross soccer paths.

Click below for more story and photos from this game:

As the organizer Venanzio Ciampa said,

“Steve Nash brought soccer sunshine in New York today and its going to last a longtime.”

The game was played to raise funds for the Steve Nash Foundation and the Claudio Reyna Foundation and some of the proceeds will help restore soccer fields in New York.

It was an exciting game and the NBA stars showed their soccer prowess –Jason Kidd had a couple of assists and was always dangerous as right flank – Nash scored an incredible goal and had many duets with Thierry Henry who showed some improbable soccer moves and scored a couple of goals .

Dressed in Replay throwback uniforms the athletes entered the field ready to give a great show but also for bragging rights. Reyna’s team went initially on top 2-0 with a goal by the entraining Baron Davis who also caused a penalty and innumerable laughs throughout the game.

The game was followed by an invitation only event at the Replay store in SoHo. $20,000 was raised at the live auction for Nash and Reyna’s charities.