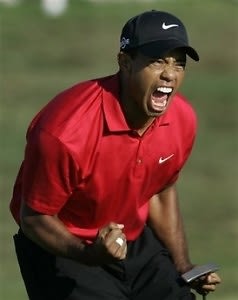 Tiger Woods reacts after sinking a birdie putt on the 18th green forcing a playoff against Rocco Mediate during the fourth round of the US Open championship at Torrey Pines Golf Course on Sunday, June 15, 2008 in San Diego. (AP Photo/Lenny Ignelzi)

It's Tiger versus Rocco in a historic 18-hole playoff to take place tomorrow night at Torrey Pines in San Diego. I am 100% team Tiger as he was the only professional golfer I knew existed until this weekend when I was semi-forced into watching the US Open (it's not as boring as I thought it would be).  Rocco Mediate has an equally cool name, but Tiger is just so darn cute how could you not root for him?  And, with the knee injury to boot (again, being the golf retard I am, I wasn't fully aware that this kind of injury would be so damaging to your game), alas, that Tiger is a fighter!

So, I'm told, history is in the making tomorrow night, as the two players both finished the fourth round with a one-under-par (um...guessing that's good?).  If anything, it's one of the best-named match ups I've seen in awhile.  Tiger vs. Rocco...who's team you on?